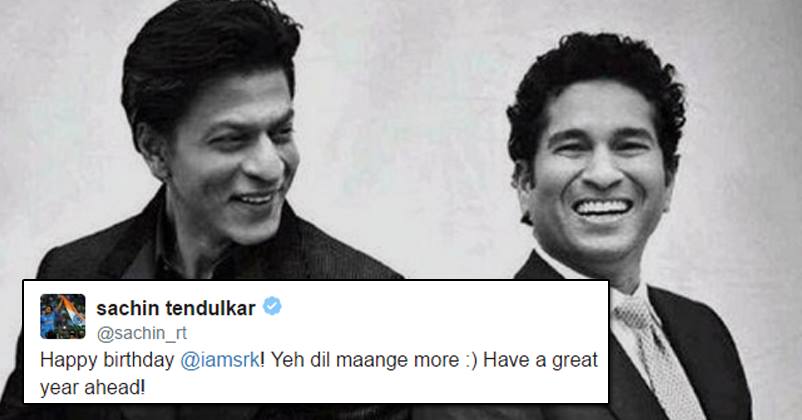 Shah Rukh Khan, who has now become the king of Bollywood started his career in 1988-1990 by appearing in several television shows. People who have given him one of his first acting contracts must be proud seeing him ruling the industry like a BOSS!!! There were days when he did not even have a place to sleep and today, Shah Rukh Khan’s net worth is $600 billion! He has fans all around the world. His name is enough for people to recall who he is. All this happened after he insanely ran after his dreams and grabbed each one them with his hardwork.

It’s Badshah’s 51st birthday and I don’t think any of his fans will ever want his era to end. On this special day, big names of Bollywood came together and showered their best wishes for King Khan.

Happy birthday @iamsrk ❤️Wish you the best in each and every aspect of your life. Happiness in abundance. Hugs.

Happy birthday bhai!!!! Love you lots and thank you for a super evening!!!!! Have the most spectacular year!!!!❤️❤️❤️❤️@iamsrk pic.twitter.com/bwHfMezdzL

Farah’s lovely wish for the king…

A million memories, a 1000 shared dreams n 100s of inside jokes!!friendships r made of these!happy birthday @iamsrk may the force b with u!! pic.twitter.com/YrF8AInPFy

A Jhakkas wish for SRK by Anil Kapoor…

Happy Birthday @iamsrk ! Here's wishing you happiness, joy and success in the years to come. pic.twitter.com/mrDlRbYyQs

A very Happy Birthday to @iamsrk . May you stay blessed forever! pic.twitter.com/cf2huu13Pm

Birthday wish by the god of cricket…

Happy birthday shahrukh. May U continue to rise higher.. and sink deeper unto everything. All my love always . @iamsrk

Happy Birthday King Khan @ImSRK. I am sure you will have a blast today! Wish you a great year ahead. #SRK #KKR pic.twitter.com/gyd5sKL9Gy

May you have a Happiest Birthday Shah Rukh! Stay blessed, healthy and keep spreading smiles on our faces with your wonderful acting.

Are you a fan of SRK? Did you like the wishes that he has received from his well wishers? Do leave your perfect wish for the star in the comments section below!

If You Are SRK’s Biggest Fan Then These Rare Stories About Him Is A Must Read For You
This Beautiful Girl Addresses All Boys As ‘Bhaiyyaji’! You’ll Love Their Million Dollar Reactions!