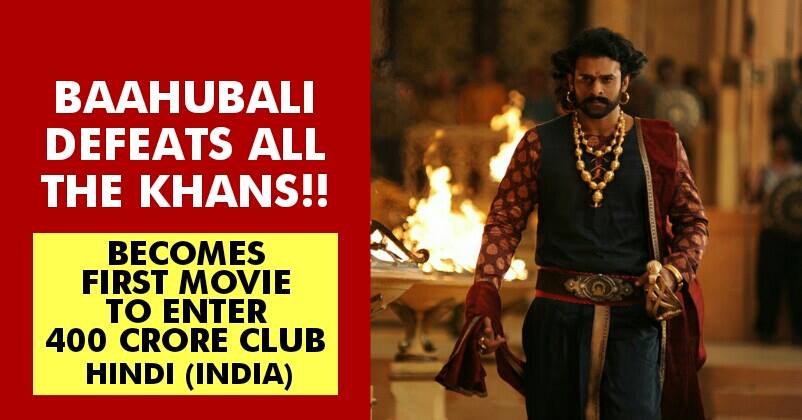 In just 2 weeks of release, Baahubali has proved that it is the king of all movies. It has been on a record breaking spree since 28th of April, but it still can’t get enough of it. Looks as if the film has pledged to break the biggest of records as every passing day we are seeing some excellent achievements. After Baahubali 2’s (All versions) worldwide collections crossed 1000 crores, makers were eyeing at some more records; finally, a BIG one has been broken and this time, it has defeated all Hindi movies.

At the end of the 2nd week, Baahubali 2 (Hindi version) has already become the highest grosser of all time in India. The film has collected Rs 400 crores, thereby leaving behind the lifetime collections of Dangal i.e. 387 crores.

If you don’t believe us, check out these tweets from the expert trade analyst Taran Adarsh;

Here’s what he tweeted about Baahubali 2 (Hindi version) collections at the end of 2 weeks i.e. till Thursday (11th of May 2017);

Baahubali 2 was just 10 crores away from 400 crores club and it has achieved it through Friday (12th of May 2017) morning and afternoon shows. Here’s what Taran tweeted once again;

This is something that no one must have expected. It took 6 weeks for Dangal to reach 387 crores, but Baahubali 2 surpassed it in 2 weeks itself. With 400 crores, the movie has already created a new benchmark in Indian cinema. Movies like PK and Dangal achieved 300 crores, but this SS Rajamouli movie is the first one to get a whopping 400 crores.

Someone Said AbRam Is Aryan’s Child From His GF In Romania! SRK Slammed Rumors Like A Boss!
Let’s Test Your Cricket Knowledge! Can You Answer These Questions Asked By Juhi Chawla?