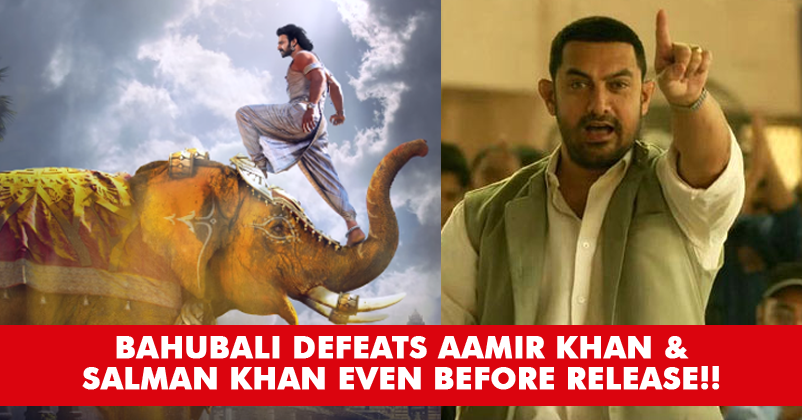 Baahubali 2 is gearing up for the biggest release ever. The movie which will be releasing tomorrow is surely going to break many records.

The movie’s first part did incredibly good for its commendable graphics, stunts, and content. The movie left us hungry for the question – Why did Katappa Kill Baahubali?

Finally, we all will have our answers this Friday. While we already know the box office results, the collections will be huge and we can already foresee that. There are many records the movie has already broken and we thought we should share it with our readers.

The movie will release in over 9000 screens all over India. Out of which 6500 screens is in Hindi while 2500 will be in other languages that include Tamil, Telugu, Kannada. This is the first time, a movie will have such wide release nationwide. The advance booking record of Baahubali 2 has broken even Dangal’s record by clocking the highest numbers of tickets sold. The number of tickets sold is 1 million. The record was last made by Aamir Khan’s Dangal and now it is Baahubali 2 which has overtaken.

“BookMyShow is experiencing an unprecedented advance booking for Baahubali 2. We have already sold over 1 million tickets across languages, even when the bookings have been live for just over a day. Though Baahubali 2 is largely perceived to be loved by South Indian audience, the response from Hindi speaking markets has been highly encouraging as well. Once all the cinemas in South come out with their schedules for the film, we expect the online ticket sales for Baahubali 2 to surge at an increasingly fast pace.”

Here are the records the trailer of Baahubali 2 broke: Apart from all this, the movie has already earned 500 Crores from its distribution and theatrical rights. Here’s What Ramesh Bala tweeted about the pre- release business:

We can expect a huge number on the day of the opening. We are pretty sure, this time Baahubali The Conclusion is going to break many big movies’ record. What do you guys feel?

GoT Actors Beat Even Kapil & Salman In Terms Of The Amount They Get Per Episode! #JawDropped
Vinod Khanna Passed Away At 70 After Battling With Cancer! May His Soul Rest In Peace!