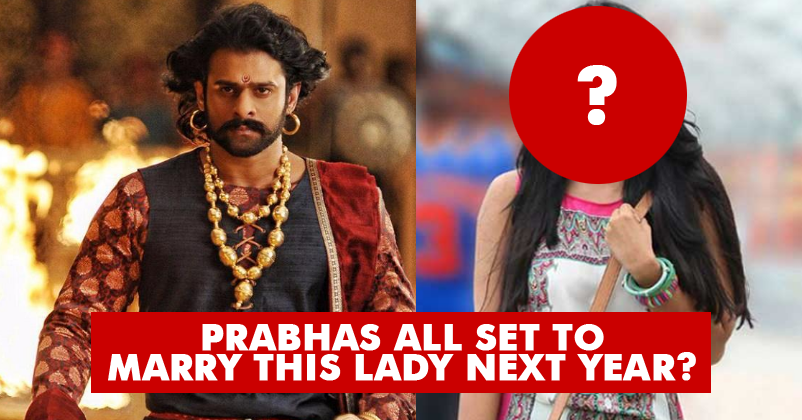 Baahubali fame Prabhas is the new most eligible bachelor of India. The Telugu film industry hunk has broken all the boundaries to be a worldwide sensation and girls can’t help themselves drooling over this charming dude.

Earlier this month, it was reported that Prabhas rejected almost 6000 marriage proposals while shooting for Baahubali 2. And now when the film has become a historic success and Prabhas is ready with another big film Saaho, seems like the marriage plans are materialising for the star.

There were reports earlier that Prabhas’ bride is from Bhimavaram (Andhra Pradesh) and even her photos went viral on social media. But later his uncle Krishnam Raj trashed all rumours and hinted that he may get married after Baahubali 2.

Then just a week ago, it was being said that Prabhas and his Baahubali co-star Anushka Shetty are likely to get married and they are performing some rituals to go in a smooth way. Later, Anushka slammed the media for such rumours and the news came around to be false. Now, as per the fresh media reports, Prabhas is going to get hitched with the granddaughter of Raasi Cement Industrialist Chairman. Reports also claim that recently both families have spoken, but there is no official announcement by them either it is marriage or business proposal.

Well, it’s too early to reach a conclusion just on the basis of speculations. We think one should wait for it. When the right time will come, Prabhas himself will make the announcement. What do you think?

Remember Sunny Deol’s Son In Gadar? He Is All Set To Make His Debut In Bollywood With “Genius”!
Day 4 Collections Of Sachin’s Biopic Are Out! The Film Has Earned Better Numbers Than Half Girlfriend!