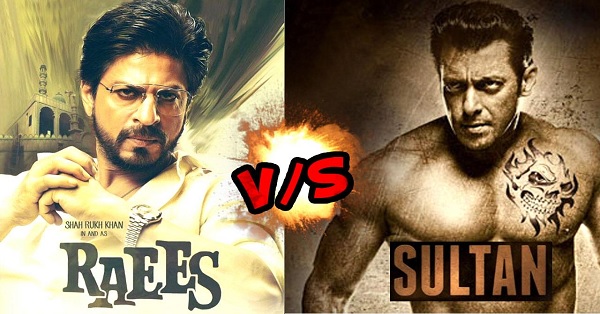 Raees and Sultan are going to be the biggest films of this year. However, this wasn’t enough; there were even rumors of clashing each other at box office this Eid. People had already started making speculations about who would be more successful. Shah Rukh Khan and Salman Khan’s growing friendship gave a hope to people about this clash not happening! But you know what? This clash is actually not going to happen. Raees has stepped back, thus allowing Sultan to enjoy the start. Komal Nahta, the Trade Analyst tweeted “And now, here’s the news of the year!! ShahRukhKhan’s Raees has been postponed. It will NOT clash with SalmanKhan’s Sultan on Eid this year.”

And now, here's the news of the year!! ShahRukhKhan's Raees has been postponed. It will NOT clash with SalmanKhan's Sultan on Eid this year.

Some people spreading Rumours about #Raees release being moved.. Like I said RUMOURS

This will keep us guessing whether clash has been avoided or not. This would have been the greatest clash of Bollywood and would have affected both the films badly, because Salman and Shah rukh both enjoy unprecedented fan following. When Salman was asked his opinion about the clash, he stated that every time there is a clash, Shah Rukh emerges as the winner.

On the other hand, in an exclusive chat, SRK had hinted about the shift in Raees’ release date. He stated that the release date of Raees date might shift but had no idea about readiness of Sultan. Raees would be ready by January and since he, Aditya Chopra, Salman, Ali are all good friends, they could figure out a date mutually. Check out SRK talking about Sultan:-

Hope things would be good for both the films!

Who Is This Super Hot Bollywood Actress Shooting For A Bhatt Camp Movie?
Unbelievable! You Won’t Believe Alia Bhatt Spent Such A Whopping Amount While Partying With Her Girl Friends!