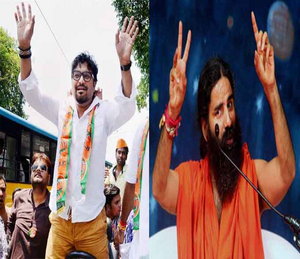 The news got revealed by BJP MP Babul Supriyo who unveiled the secret that his BJP ticket could be made available only by the yoga guru. On February 28, it so happened that by chance he got to sit beside Baba on a flight where he eavesdropped Ramdev having a discussion with someone regarding the distribution of BJP ticket. In a hilarious way, he said to Ramdev, “Baba I also want a ticket. And if you do not give it, I will tell the media how you are giving tickets to people.” At this, Baba got stunned and made his contact number note down by his secretary.

The singer received a call from Rakesh, an RSS pracharak on March 1 who informed him, “Baba has told us about you. How much money will you be able to spend? The limit is Rs 70 lakh but some people spend more than that.” Supriyo said, “I love Modiji and that is why I want to contest.”

After 3 days, Ramdev called and notified him of the confirmation of his candidature. Babul Supriyo told Baba that he was unable to bear the necessary expenses. In a humorous tone, yoga guru said, “That will be taken care of by the BJP. But you promise to me that you will learn Pavan Mukta asana (a pose to release gas).”

Rahul Sinha inquired from the singer whether he was interested in contesting the election from Asansol. On asking ‘why’, the state president replied, “Because Asansol is a Hindi belt and you speak that language well. We believe if we work hard, we can win that seat.” Supriyo made an outstanding triumph from the Lok Sabha constituency of Asansol beating Dola Sen with a difference of more than 70,000 votes.

16-year teen murdered his classmate, took selfie and uploaded on Snapchat
New York Times is looking forward for Narendra Modi, expecting him to put an end to “Dangerous Silence”