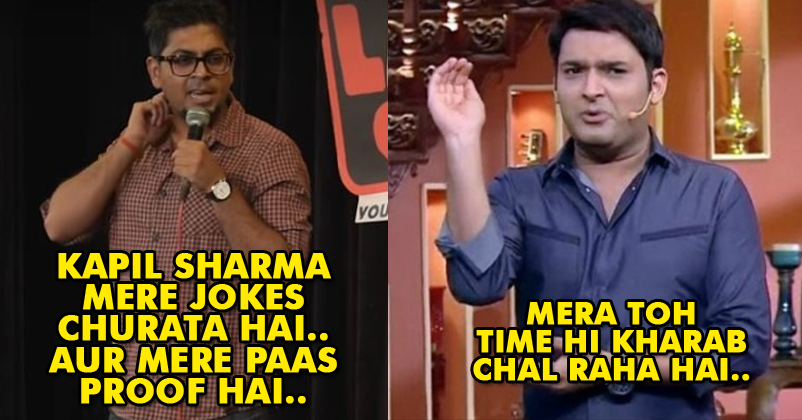 The Kapil Sharma Show is surely going through a very tough time, from being in shatters with their team members to the latest accusation of Plagiarism.

Well, you got that right, the show is accused of picking up a joke blatantly from a stand up comedian’s YouTube video.

Stand up comedian Abhijit Ganguly posted a long message on his Facebook and highlighted the fact that Kapil Sharma and his team picked up his joke on Indian bowlers in the episode featuring Mithali Raj, Veda Krishnamurthy, Jhulan Goswami and Harmanpreet Kaur – National women’s cricket team players.

It was Kiku Sharda who cracked the joke in the show and the stand up comedian said that it was his friend who informed him on Facebook and a stranger on Twitter on the same joke co-incidentally.

“Important – Lifting of Joke/Plagiarism by The Kapil Sharma Show
Please share this so that it reaches the folks at The Kapil Sharma’s Show or Sony Entrainment Television.
I had released a stand-up bit on Youtube and FB on ‘having an elder brother’ around two weeks back. One of the jokes in the routine is an observational joke on how from from Kapil Dev to Zaheer Khan (citing some other names, such as Harbhajan Singh, Srinath, Kumble) all successful Indian bowlers have been co-incidentally younger brothers, leading to the punch of ‘Do you realise how weird it is that India’s bowling strength depends on the fact that elder brothers never let younger brothers ever bat’. I have been doing this bit for over three years now and most people who have ever been to my show in the last three, would have heard this. And modesty aside, many have told me that this was one of their favourite jokes.
Yesterday, at around 10:30 PM, I suddenly got a message from a friend on FB who said that my younger brother bowler joke had been lifted in The Kapil Sharma Show. Someone also tweeted out to me informing me of the same.I was genuinely flustered but still wanted to check before drawing any conclusions. Having checked online, I am disappointed and gutted to see that they have indeed done that.
There I saw Kiku Sharda trying to use my joke (and honestly making a mess of it) while Sidhu and others laughed out in their usual hysterical manner as every cell in my body burnt with rage.
I understand that it’s possible for two people to have the same thought, but this is not that. The fact that right two weeks after I released this bit (which got a decent amount of traction), they just happen to use it while awkwardly trying to use the same examples as premise makes it clear what has happened.
A stand-up bit takes a lot of effort to write and fine-tune. As comedians we strive for originality and after having made all the effort in coming out with a unique observation and building a joke around it, when something like this happens it just deflates you.
We comedians make a living from our self-written jokes. It’s what I depend on to run my house. When you lift a joke I have written, you steal from me. It is as good as stealing my wallet, my watch, laptop or just a goddam robbery at my home.
No Kapil Sharma, plagiarism is not OK. It is not OK to do this. It is not OK to lift a man’s joke and do it on national TV where millions will now think you goddam wrote that joke, and if I am to ever perform it, it comes off as I lifted it.
I am feeling angry, and helpless. I just hope there can be enough noise around this, so that it doesn’t happen anymore with anyone else.”

Abhijit has pointed out that this can’t be co-incidence as his video was released online just 2 weeks back and the joke was cracked at the exact same time.

Click here watch that joke on Kapil’s episode. Skip to 52:15 for that joke.

Well, we wonder how the team will react to this new cotroversy. We pray for the best. What do you guys feel about this plagiarism accusation ? Let us know in the comments sections.

This Wedding Dance Of The Bride Is Winning Hearts All Over, Watch How The Groom Watches Her Dance
Sunil Grover Speaks Up On His New Project! His Statement Might Make Kapil Very Sad