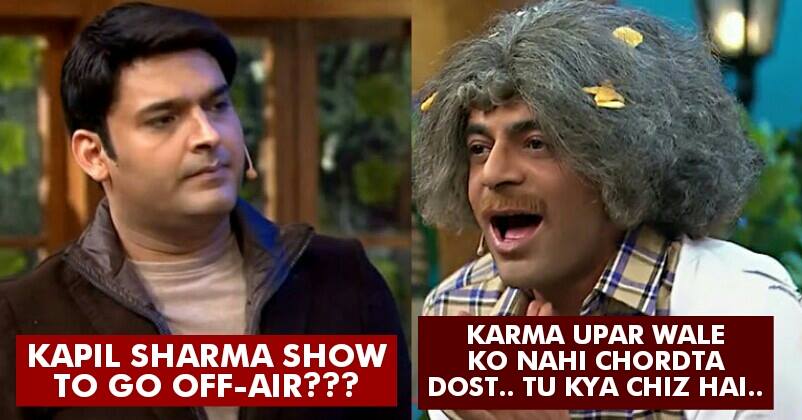 Kapil Sharma’s show is surely having worst of the time and we have to admit that it is better for the show to end with a little good reputation it has than continue with no respect.

Now the ultimate bad news is here. The Kapil Sharma Show will go off air very soon. The show’s contract will not be renewed anymore as reported by leading daily.

As revealed by the leading daily DNA,

“Sony, the channel that airs the show, is in no mood to renew their contract with the comedian-actor which means it is the end of the road for The Kapil Sharma Show.”

The source quoted to the leading daily

“The makers are definitely not ready to pay Rs 107 crore for a show which is getting them nothing. Kapil might negotiate but the channel heads are shocked. Either Kapil has to get back Sunil and Ali, else his show stands scrapped. The latter is most likely to happen because Grover and Asgar are not ready to budge from their stand.”

We had already reported that Sunil Grover has confirmed that he has not yet signed any new show with Sony Channel. “They are planning to invest in Sunil now for a different show altogether. Ever since the fight happened, even rival channel Colors (who have a long standing issue with Kapil) has approached Sunil for a show but he has not signed anything. Sony has rights to his characters — Rinku bhabhi and Dr. Mashoor Gulati— and they also earn a chunk of money from his live shows where he performs in his avatars. So they might have a show with these characters.”

As of now, we cannot confirm Sunil Grover until and unless there’s an official announcement on the same.

The fight and all the negative publicity around the show have definitely affected the show ratings and this further made Sony Channel take the final call. Will you guys miss The Kapil Sharma Show or not? Let us know in the comments section.

Akshay Kumar Slams Controversy Makers! Asks To Take Back His National Award!
KRK Says Sonu Nigam Asked Him To Tweet In Favor Of Him! Sonu Slammed Him With 1 Tweet!