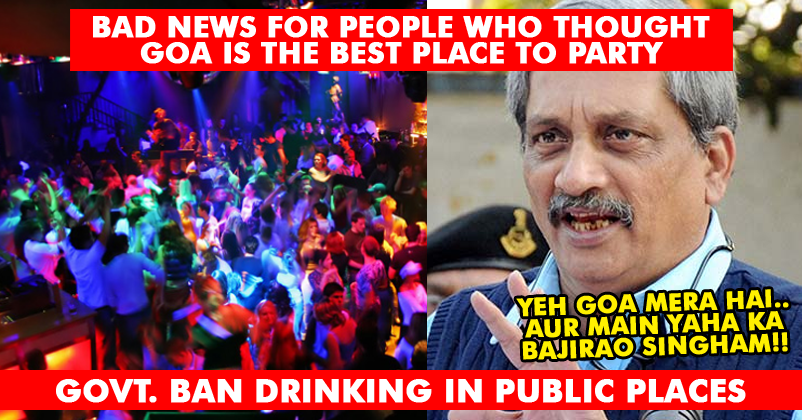 Goa will be no more an ideal place for party animals who love to drink publicly on its beaches and streets. The tourist state’s government has just announced a ban on public drinking, and you could well land in jail if you get caught doing the offence. “There are complaints from common people about consumption of liquor in public places, which leads to littering and other nuisance. The existing excise law needs to be amended for the same,”

“The state excise department would amend the Goa, Daman and Diu Excise Act, 1964, which would give powers to the department’s inspectors to punish the offenders,”

To get started, the department has already formed a committee headed by former excise commissioner Ashok Desai to review the existing excise law, D’Souza said.

According to government records, there are 332 wholesale liquor shops in Goa, besides 9,445 bars and restaurants serving alcohol.

This tweet by ANI talks about the complaints received,

According to a statement, “The tourist places are defined as beaches and other spots, and India Reserve Battalion (IRB) of Goa Police have been asked to take action against those found drinking at these places. It is working as a deterrent,”.

The tourism department took the step after groups of errant tourists were found drinking and breaking glass bottles on the beaches, resulting in several injuries, he said.

However, D’Souza said, the ban needs to be introduced in a balanced way since they don’t intend to ruin the fun.

“There are many families who go on picnics where they drink in open spaces. They don’t create nuisance. The ban should not affect such kind of picnics,”

The department is also considering to ban liquor consumption in public places during certain hours.

“We can even restrict the timings so that there is a control (on the problem),” he said.

As soon as the news was out, couple of people reacted on Twitter. Here’s what they said

I love this one
Outsiders should be taught to respect #Goa
We had enough of belittling…For Tourism Sake https://t.co/KmELvXp7uC

We think this is a great step by state government moving forward. Public drinking and creating disturbance is something which needs to be controlled.

Continue Reading
You may also like...
Related Topics:Goa, India, party