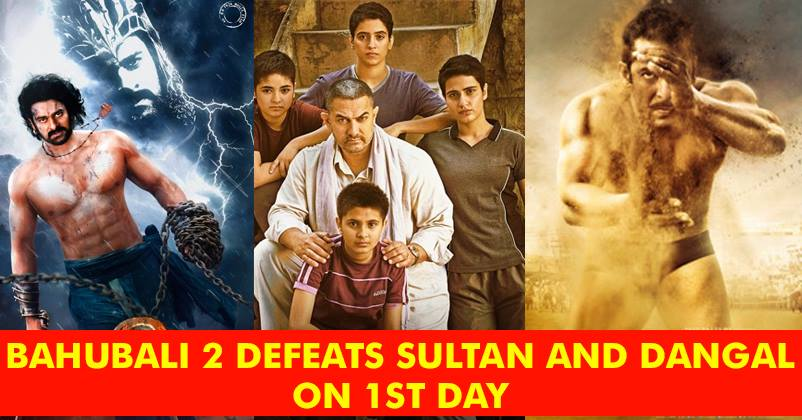 Baahubali 2 is breaking records and we so knew that this would happen. The advance booking has already sold 1 million tickets which broke Dangal’s record.

The latest reports suggest that the movie has broken records of Salman Khan’s Sultan, Aamir Khan’s Dangal and Shah Rukh Khan’s Raees in terms of the occupancy.

The website India.com suggested that Baahubali 2 has 95 percent occupancy all over India which is the highest till date in both the years 2016 and 2017.

Salman Khan’s Sultan had created the record with 80-90 % occupancy last year. Aamir’s Dangal, as well as Shah Rukh Khan’s Raees, were leading second with 70 percent occupancies on day one.

95 % occupancy is one record breaking number and Baahubali has therefore made history again.

The film released all over India in 8000 screens and it defeated Sultan which released over 4000 screens.

The popularity of the movie is surely unbeatable. The record-breaking journey has started today and we are pretty sure the first day collections will totally surprise even more or maybe not.

“Bahubali 2 has started off with an insane occupancy! Currently across India, almost all the shows are Housefull. In a very long time, we haven’t seen such a scenario during the morning shows. Virtually across India, the occupancy is 100 per cent barring a few places. So you can say it is around 90-95 per cent, which is insane during the morning shows. The last time we saw something like this was during Prem Ratan Dhan Payo, which opened like a Tsunami and Dhoom 3. None of the other recent films have opened so well and this has to be credited to the mass hysteria and anticipation that people had for Bahubali 2.But that’s not the end of it. The movie has also clocked in the highest advance booking ever with a collection of Rs 36 crore in 24 hours. And with such a fantastic occupancy and such a huge screen space, we are sure it will shatter all the records at the box office pretty soon. Our trade guru has already predicted that Bahubali 2: The Conclusion should rake in about Rs 60-70 crore on day one through all the versions, thereby becoming the biggest opener at the box office ever! It can also potentially become the highest first weekend grosser if it crushes Sultan’s record and rakes in a staggering Rs 250 crore in just 3 days.”

Below is RVCJ’s review by public straight from theatres!

Well, now the official figures are awaited. Watch out this space for the box office collections of Baahubali 2. Also, let us know your predictions in the comments section.