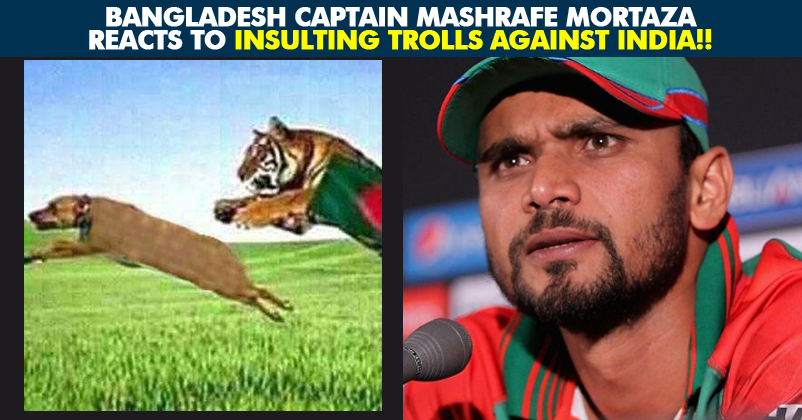 There have not been many days when a meme surfaced on social media sites featuring a tiger draped in the Bangladeshi flag and it was chasing a dog draped in the Indian flag. This meme was made by a Bangladeshi fan and aimed at insulting India. This was not the first time when such an attempt was made. Earlier too, a photoshopped image of Bangladeshi bowler Taskin Ahmed holding the head of M. S. Dhoni was doing rounds over web and social media. There had been no satisfactory reply from the Bangladeshi cricket team so far. However, Mashrafe Mortaza, the Bangladeshi team’s captain, has finally spoken up on the matter. Mortaza expresses his unhappiness over such offensive posts and is of the opinion that they don’t create any positive effect on the team’s psyche. Slamming the act of derogatory photos and cartoons, he adds that the players of the team have absolutely no control on these stuffs. Here’s what he had to say about the semi-final clash of India and Bangladesh,

“These things are not expected and not in the control of players. A match against India is just another game for us and if these cartoons are meant to lift our convictions levels, they just don’t work.”

Just to inform, memes started doing rounds on the Internet after England defeated Australia and South Africa was defeated by India. Hence, India and Bangladesh will face each other in the semi-final, which will take place today at Edgbaston Cricket Ground. The victorious team will then face Pak in the final of ICC Champions Trophy 2017.

As per Mortaza, India will be under higher pressure to win in the semi-final, taking into account the love for cricket in the country as well as the population of India. He further added that his team must think of the semi-final as an ordinary match, as they would be overpressurized if they play the game considering it as the semi-final.