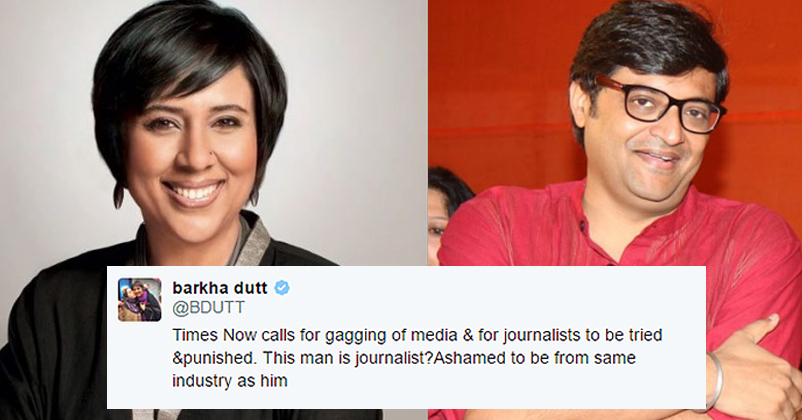 Have you ever observed your class from a safe point ? You will see friendship. The love that they have for each other. But nature loves symmetry and so does the nature of your class. Where there is love, there is hatred too. Hatred among students for each other.

Now just assume our whole country India as a classroom. A politicians is hating another one (Modi vs Kejru Saga), even a terrorist is hating another terrorist ( Choota Rajan playing Hide and Seek With Dowood). But what is surprising to see is that even journalists have started hating each other.

Yes, the old stone cold rivalry of Barkha Dutt with Arnab Goswami is lately getting some heat when Arnab Goswami slashed her image with his witty and yet another aggressive news prime time dialogues.

The rivalry between Arnab Goswami with many journalists like Rajdeep Sardesai and Barkha Dutt is not a hidden truth. Recently Arnab Goswami smashed every single of them with his aggressive approach towards the debate of Kashmir and Zakir Naik saying that if these Pseudo Liberals still consider him to be innocent, they should better leave the country and go back to Pakistan. Now whenever even a small kid shouts out loud saying Pseudo Liberal, even a tortoise looks back at Rajdeep and Barkha. A day later after Arnab’s gruesome attack, Barkha Dutt took this to her Facebook account and expressed her disappointment by saying that she is disappointed of being from the same industry where a man like Arnab Goswami calls himself a journalist.

She goes on to tag Arnab Goswami as a ‘CHAMCHA’ alleging him for staying silent on the Narendra Modi’s softcore attitude towards Pakistan. She also calls him a hypocrite for asking the current government to ban a section of media and tagging them as ISI Agents without any proof and moral grounds.

At the end she made sure to clear his doubts by saying that it doesn’t really bother her no matter how many times he attacks her by taking her name directly or indirectly.

Currently she has got more than 19 Thousand likes on that particular Facebook status. But when I looked down in the comment sections, story was something different. Have a look on what people had to say about her approach.

But Ma'am @bdutt, that statement is for journalists. And you are a politician running for the post of Pakistan's Prime Minister. Ignore him.

@ArvindKejriwal Your Journalism was over after you blamed Kashmiri Pandits for their own exodus.

.@BDUTT Ashamed because few are doing Journalism the right way?

Now it’s out open in public. The feud between them. It will be interesting to see what response does Arnab Goswami has to give on her fitting reply.

Now when a whole mass papulation is looking upto them for information and knowledge, it’s certainly quite immature for both the journalist to make personal remarks against each other directly or indirectly.

So This Was The Cost Of Vidya Balan’s Jhumkas?? How’s That Possible???
Inhuman! This Young Mumbai Girl Beaten Up For Boarding The ‘WRONG’ Train!