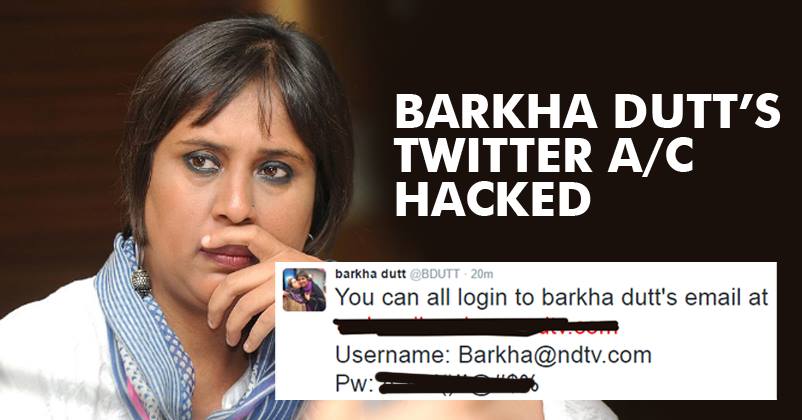 After Rahul Gandhi and INC’s account hack episode, it is time for Barkha Dutt’s account. Yes, you heard it right; Barkha’s Twitter is HACKED few minutes back.

Not only were abusive tweets put on her Twitter handle, but even emails by journalists were leaked. The tweets were posted by the same group “Legion” who hacked Rahul and INC’s accounts.

It is strange to see how her account was hacked; well, the hacker shared her official login ID and password and it definitely appeared to be very strong. Breaking such a strong password via Brute force is next to impossible! We’re not sure how hackers are breaking to almost any account they want. See they even revealed Barkha’s official password:-

They mentioned that they have installed malicious software in most of the computer networks that’s why they can hack anything! So however strong password you will have but if the network or Wifi to which you’re connected is infected with malicious program then you are prone to hacking! If hacker really wanted to add!

Another surgical strike on Pakistan!

BREAKING:We Strongly Condemn This Act Of Hacking On Our Journalists. We'll Take This Issue To UN: Nawaz Sharif

One thing worth noticing is that, accounts of only those who are against BJP are being hacked; 1st Rahul, and now Barkha Dutt; is it a co-incidence or is it a conspiracy? Cyber cell must investigate the matter ASAP. Since we are moving to digital era and account hack is as similar as theft. This crime should be taken seriously and police should do the investigation in this matter to find the culprit.

Once again blame games will start! What step should be taken according to you? Do let us know in our comments section below.

After Sahil Anand This Contestant Got Evicted From BB House & That Too With A Twist!
10 Foods Which Are Much Healthier When Eaten Together!