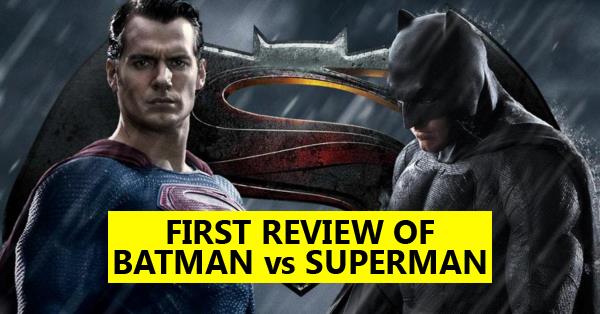 The first review of the movie “Batman v Superman: Dawn of Justice” is out and going by the review, it seems that the flick is going to storm the Box Office. The audience has been impressed by the movie as well as the wonderful acting performances of the actors. Directed by Zack Snyder, Batman v Superman stars Ben Affleck, Gal Gadot, Henry Cavill, Laurence Fishburne, Jason Momoa, Jesse Eisenberg, Amy Adams and Diane Lane. Earlier there were some apprehensions about the movie as its first and third trailers were well received by audiences but the second trailer failed to generate enthusiasm in viewers. However, now some people are of the opinion that the movie is even better than the Avengers and it seems “Captain America: Civil War”, has got some serious competition to deal with. The inclusion of Spider-Man has generated some curiosity but will it deliver in actual is a question that is doing rounds.

#BatmanvSuperman review: Holy sh*t out of 10.

The 1st review from my council is in for #batmanvsuperman "If Avengers and TDK had a baby this movie is it" #wow pic.twitter.com/FUmOdhWEBN

The best (not as in most positive, but most comprehensive and critically minded) #BatmanvSuperman review I've read. pic.twitter.com/I6MB3lHFCa

However, the movie could have been better than what it is now if two characters – Joker and Riddler were involved in it. Zack Snyder just recently disclosed that these two characters were talked about a lot but they could not make into the movie. Zack talked about the reason too, “The Joker and the Riddler both came close to being in this movie. We talked about the possibility of putting them in. Chris Terrio (screenwriter) and I talked about it a lot and felt that their mythological presence is felt in the movie and that’s cool, but I didn’t want to get my eye too far off the ball because I needed to spend the time, frankly, with Batman and Superman to understand the conflict.”

In fact, a reference was given to these characters when Batman says, “freaks dressed as clowns” and the walls were colored with the question graffiti.

“Batman v Superman: Dawn of Justice” is going to release on 25th March in India, so get ready to enjoy the weekend with Superheroes.

Some Facts About Bhagat Singh, Sukhdev And Rajguru On Their Death Anniversary
Don’t Look At This Scary & Horrific Look Of Akshay Kumar In Robot 2 At Night!