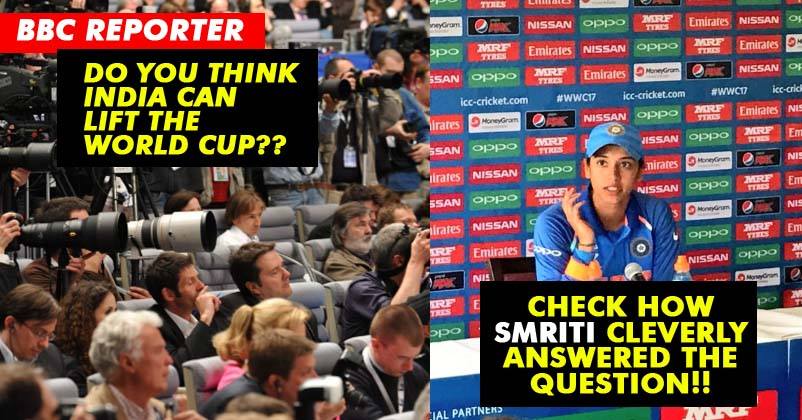 Indian women cricket players are literally rocking the World Cup 2017 with back to back amazing performances. It’s not just the opponents who are scared by them, but the reporters are also confused about the questions they need to ask. Everyone looked with wow on their face when the captain Mithali Raj gave a breathtaking reply to a journalist who asked her about her favourite male cricketer. The latest one to join her and defend media attacks like a pro was another Indian female cricketer, Smriti Mandhana. After a striking victory against Team West Indies, Smriti was asked by a BBC journalist that whether she thought Team India would be able to win the World Cup this year.

Giving him a perfect answer, Smriti said, ‘“What? You don’t?”

The reporter was stunned by the answer she gave and couldn’t stop himself appreciating through his Twitter account. Here’s what he tweeted-

"Do you think India can win the tournament?"

"What? You don't?"@mandhana_smriti as good in the press conference as in the middle. pic.twitter.com/zNMZKF4Buv

“Do you think India can win the tournament?”

@mandhana_smriti as good in the press conference as in the middle.

Well, that was seriously an epic answer and showed how confident our female players are. We are totally in awe of Smriti’s reply. What do you think?

Continue Reading
You may also like...
Related Topics:Smriti Mandhana

The Difference Between ICC Champions Trophy & ICC Women World Cup 2017 Prize Money Will Shock You
Dhoni Is A Magician! How He Saved Himself From Stump-out Is Better Than His Stumping Trick