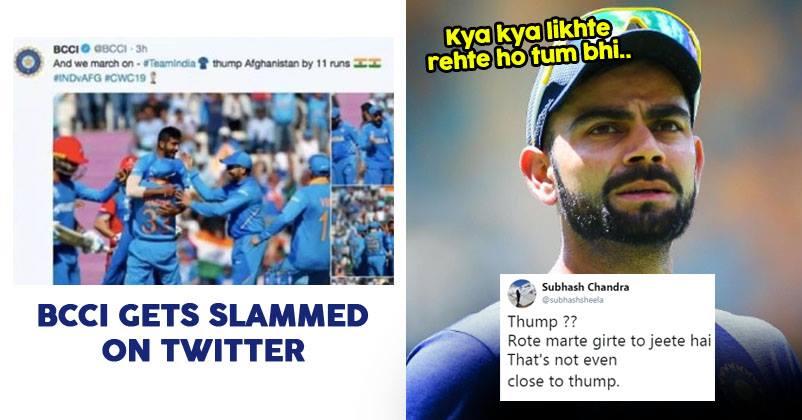 India competed against Afghanistan in the last match of ICC World Cup. Although Afghanistan lost the match it gave a tough competition to India which raised the excitement of the game till the last over.
India started great but Afghanistan bowlers restricted Men in Blue to 224 runs. Mohammad Nabi’s batting made Indian bowlers chew their nails. It was a hard win and Afghanistan, though lost the match, won hearts.

After India’s win, BCCI tweeted a congratulatory message for the team, calling the victory a thumping win. It wrote, “And we march on – #TeamIndia thump Afghanistan by 11 runs” and neglected Afghanistan’s hardship and efforts. 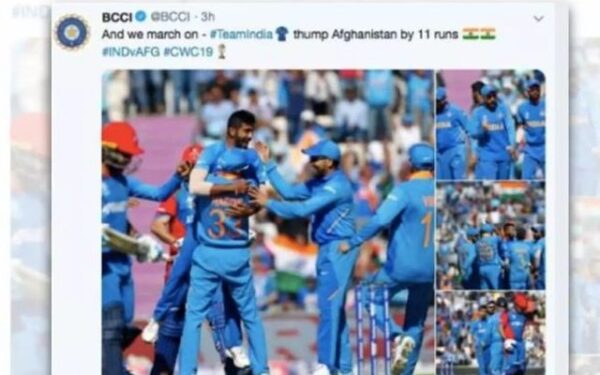 However, Indians were not very happy with India’s win and BCCI’s tweet. They slammed BCCI for not giving credit to Afghanistan which gave India a neck to neck competition. After this BCCI deleted the tweet and posted a new one, which read, “As #TeamIndia beat Afghanistan by 11 runs 🇮🇳🇮🇳 we march and move on to Manchester next.”

As #TeamIndia beat Afghanistan by 11 runs 🇮🇳🇮🇳 we march and move on to Manchester next #INDvAFG #CWC19 pic.twitter.com/KJu4c2jfWQ

this is right ,india frankly didn't thump afghans ,they almost thumped india ,they just won by a narrow margin ,, don't underestimate any team, respect cricket, respect teams ,u learnt the lesson in an hard way !!!!!

@BCCI
224/8 and a "thump" won by 11runs? The word is Shame. Afghanistan team is closing in with indian team in terms of score every time they play cricket.

@BCCI *Thump* correct word should have been crawled. Someone needs to go back to kindergarten. Pathetic show by batsmen who were playing to resurrect Afghanistan. You were playing a tournament and not a friendly match

Storm in a teacup as surely no one’s offended by the word thump? We all know they just squeaked home though.

Thump ??
Rote marte girte to jeete hai …That's not even close to thump.

Thump? Which game was this idiotic twitter handle watching then?

Y’all should look up the meaning of the word ‘thump’. It doesn’t mean “almost got beaten by…” or “just barely survived”. lol

@BCCI handle should know that ‘thump’ means the team wins by a huge margin. Afghanistan almost won the game. Stop doing self praising only and show respect to the effort of @ACBofficials too.

"Thump" is exaggeration. We just won, that too not easily.

Thump??? What are you on? Afghanistan has exposed the weaknesses of the Indian team and bcci thinks fans are that gullible to believe them.

You can't thump a team by 11 runs. I think 'scrape' is more apposite in these circumstances.

This Picture Of Virat Kohli’s Expression After India Lost It’s DRS Review, Is Now The Base Of Hilarious Memes
West Indies Pacer Sheldon Cotterell Gives A Perfect Reply When Asked About His Few Followers