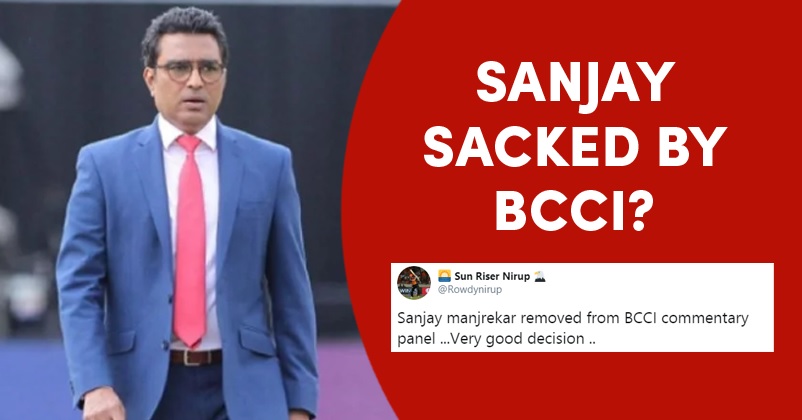 Former Indian cricketer Sanjay Manjrekar who turned commentator after getting retired from International cricket is mostly in news for wrong reasons and now he is again making headlines as the Board for Control of Cricket In India (BCCI) has sacked him from the panel of commentators. The former right-handed batsman has been one of the most controversial commentators and he can easily be called a favourite target of the Indian Twitterati.

Sanjay Manjrekar was not seen in Dharamsala where India was supposed to play the first ODI of the series against South Africa; however, the match got abandoned due to rain. It is also being said that Manjrekar won’t be a part of the panel in IPL as well because BCCI is not pleased with the manner in which he has been working.

Sanjay Manjrekar’s career started in 1987 and it was in 1996 that he took retirement. He has been doing commentary in almost every World Cup since 1999. In the year 2000, Manjrekar joined TEN Network and he did commentary in many series but in 2009, he shifted to Star Sports Network during the ICC T20 World Cup which was hosted by England.

Sanjay Manjrekar has been a part of many controversies including the one in which he called Indian player Ravindra Jadeja a “bits and pieces” cricketer and he was trolled badly for this. Jadeja also replied and asked him to stop his verbal diarrhea and respect those who have achieved more than him.

Some time ago, he was again in the center of a controversy when he passed a comment on Harsha Bhogle’s  non-cricketing background.

The Indian Twitterati got enough fodder as they heard the news of Manjrekar getting sacked and here are some of the selected reactions:

In all this news of corona, there's one happy piece of news, sanjay Manjrekar is no longer going to fill my ears with nonsense during cricket matches

Fantastic news 👌 #SanjayManjrekar reportedly sacked from the BCCI panel of commentators. He may not be in the #IPL2020 commentary panel too 👏
https://t.co/TVUBmbmwxv

Thank you! BCCI for making me smile. now I don't have to switch commentary from English to Hindi & Hindi to English to avoid Sanjay Manjrekar.
and go through dreadful uncertain times when he #sanjaymanjrekar is in the commentary box with Sunil Gavaskar. #BCCI

After the news of removal of Sanjay Manjrekar from commentary panel Jadeja and Harsha bhoghle be like #sanjaymanjrekar pic.twitter.com/zq9fATemfV

The BCCI has removed Sanjay Manjrekar from their commentary pannel

I don't know how true this news is about Sanjay Manjrekar being sacked from the commentary panel by BCCI, if it's true then may be not corona but at least we succeeded in curing the other kind of virus.

And Sanjay Manjrekar is dropped from the BCCI commentary panel. pic.twitter.com/OnZky6npzE

Thankyou BCCI for throwing out Sanjay Manjrekar from your commentary panel. The moment his commentary started I had to change the channel. Such a mood spoiler. #SanjayManjrekar

Will you miss Sanjay Manjrekar’s commentary?