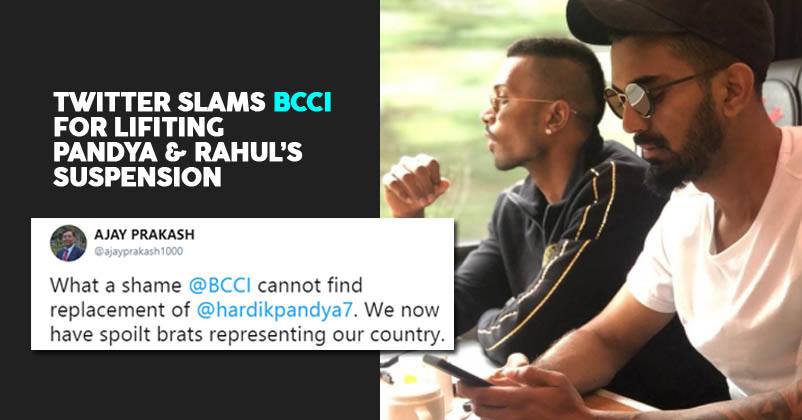 Since Hardik Pandya and KL Rahul appeared in the latest season of Koffee with Karan, controversy started brewing. Hardik Pandya’s sexist and misogynistic comments created quite a stir.

The famous chat show hosted by filmmaker Karan Johar, became talk of the town, when Hardik Pandya’s inappropriate comments on women was not well received by the netizens.

He was slammed mercilessly on the social media platforms, which prompted BCCI to ban them from playing any future matches indefinitely.

But, on Thursday The Committee of Administrators decided to lift off the ban from these two players. Both of them will soon join the Indian cricket team in New Zealand.

This decision is though a great relief for the Indian cricket team, many fans are not quite happy with this decision. See how they reacted on twitter.

@sachin_rt plz dont take #HardikPandya in your team @mipaltan .their are many youngsters who want to make place in team..in international team also..they will be like ..if hardik can do why not us . #RespectWoman

What a shame @BCCI cannot find replacement of @hardikpandya7. We now have spoilt brats representing our country. Next we will see even worse because money rules. Pathetic decision to let him play for India.

BCCI surrendered in front of the star of Mumbai Indians 👎👎👎👎

#BCCI is a filthy rich organisation but there's no credibility. Right from match fixing to #HardikPandya, their approach is questionable. #BCCI has huge bench strength. Why they've to revoke ban on #HardikPandya?? Why include that filthy pervert to represent #India?? 1/2

So it is true, Hardik Pandya is India's Benstokes. #thuglife BCCI like ECB.

Wahhh!! That was too much for repercussion of fucking it up on National Television! Shows that you can get away with anything in India! #HardikPandya pic.twitter.com/R5u8yqx9EG

So, What is your opinion regarding this?

Dhoni Dismissed Ross Taylor By Stumping Him With Lightning Speed. Video Is A Visual Treat For Fans
Pujara Didn’t Walk Out After Ball Edged His Bat & Caught By Wicket-Keeper. Twitter Slammed Him