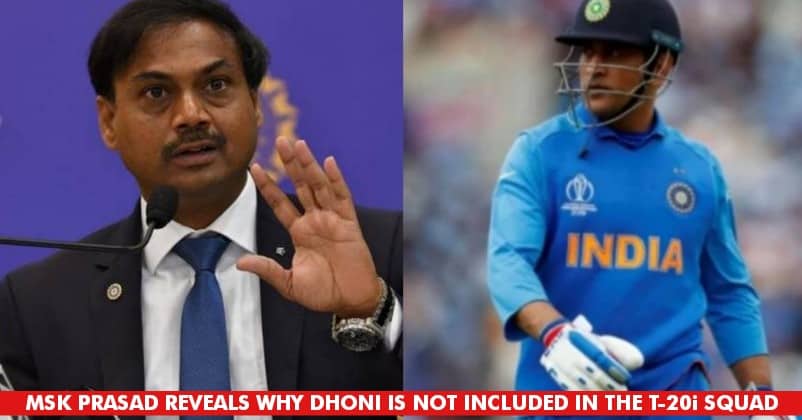 On Thursday, the Board of Cricket Council in India (BCCI) announced the 15 member squad of Indian cricket team for the upcoming T201 home series against South Africa.

It is the same team that played in the West Indies tour with one new addition Hardik Pandya is included in the top 15 squad in place of fast bowler Bhuveneshwar Kumar.

Also, the former Indian Captain MS Dhoni was not included in the squad. Indian cricket fans had a lot of questions and the chairman of the selection committee has now revealed Why MS Dhoni is not in the squad.

MSK Prasad was asked about Dhoni’s availability by India Today, he replied MS Dhoni was unavailable for the selection.

Dhoni is currently holidaying in United States of America. After ICC World Cup 2019 captain cool took two months break from cricket for himself.

A senior BCCI official told to PTI, This selection committee is clear on one front. They’ll never ask any questions to MS Dhoni about his retirement as that’s not their domain. But till they are in charge, they reserve the right to select the squad and as far as they are concerned, Rishabh Pant is now India’s first-choice keeper across formats.

Anushka Sharma Visits High Commissioner’s Residence But Nowhere To Be Seen In The Group Photo
Ambati Rayudu Got Trolled For Taking U-Turn On Retirement. Twitter Called Him India’s Shahid Afridi