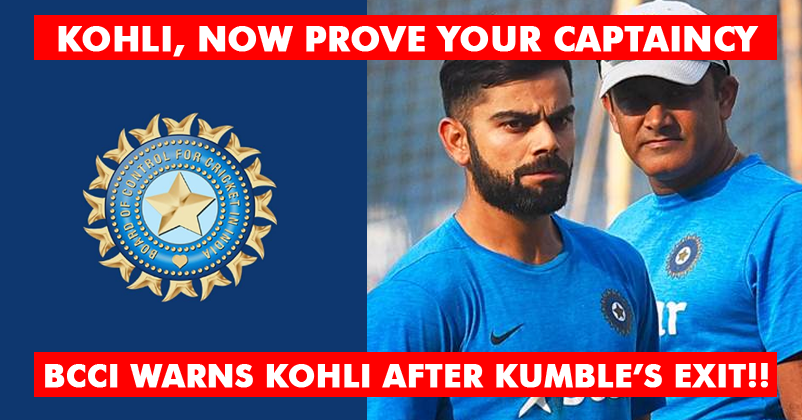 Virat Kohli and Anil Kumble’s infamous mutual issues led to the exit of the coach from the team. Now that Anil Kumble has left the team as a coach, the pressure is on captain Kohli. As per the reports, BCCI has warned Virat Kohli and has asked him to deliver results or face the consequences.

A top BCCI official said while talking to TOI-

“It has been given to understand that Kohli eventually had the veto power on the coach issue which pushed Kumble out of the team. Now that he has his way, he has to deliver as captain. Otherwise, he had it.”

As per sources, that Kohli shared his feeling of lack of trust with Kumble but on the other side, Kumble told his former teammates Sachin Tendulkar, Sourav Ganguly and VVS Laxman, that he didn’t have any issue with Kohli as such. The issue was then discussed in detail among all the members and CAC voted in favour of Kumble to continue as the head coach.

But, as per the official, Kohli had strong reservations against Kumble, who then decided to gracefully leave the scene on his own.

A new coach will also be announced before the team fly for Sri Lanka tour.

What do you think? Will Virat Kohli be able to make it without the guidance of Anil Kumble, who played a very important part in all the victories of Team India?

Sania Thrashed Haters Who Trolled Her For Her Tweet! Her Kickass Reply Deserves To Be Applauded
Revealed! Indian Team Used To Hate Anil Kumble For This Reason & It’s Surprising!