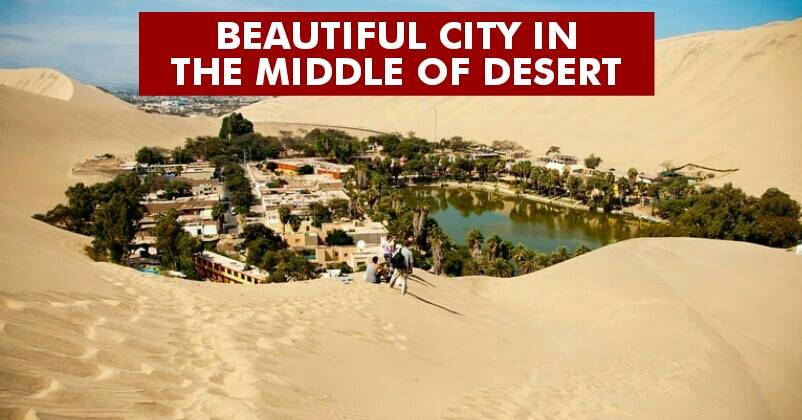 When travelling through the sand dunes of a desert, the last thing you’d expect to see is water, buildings, and a thriving civilization. But that’s not the case with Southern Peru. Right in the middle of the driest place on the earth is a beautiful oasis town with water, palm trees, vegetation, and a tranquil lagoon with exceptional curative properties. This beautiful desert oasis is called Huacachina, it is nestled in the foothills of the South America nation’s Ica Desert. This place is Located 350 kms south of Peru’s capital city Lima and it is only 10 minutes from the regional capital of Ica. This desert oasis flanked by sand dunes is such a surreal sight. Lying right in the middle of the barren Atacama desert, despite being deep in the desert, it is surrounded by a small natural lake, the lake measures around 200 meters in diameter. Huacachina settlement is home to a permanent population of 100 residents, it has many shops, hotels, lake, palm trees. This place is famous for sandboarding and sand dunes buggy rides. The people of Huacachina make their living from the tourist industry, the place is a very popular holiday destination for locals, foreigners, tourists, backpackers and adventurers. Huacachina is built around the tranquil lagoon, it is said that the lagoon has curative properties. There is an old Legend which says that the lagoon was created when a young princess was bathing, she was discovered at her bath by a hunter, she fled leaving behind the pool of water which became the lagoon. Her flowing cloak which was streaming behind her when she ran, became the surrounding sand dunes. It is even said that the young beautiful princess still lives in the oasis as a mermaid.

The desert oasis Huacachina in 1940s became a popular as a beauty spa for the wealthy Peruvians in Lima. They believed that the water of lagoon had healing powers. However its appeal declined in the 1950s. The place became famous again in the 1990s. The sand dunes of the Ica Desert that surround this beautiful oasis town measure a height up to 90 meters. This beautiful lake side town is also featured on the back of the 50 Nuevo Sol currency note of Peru. Take a look at this alluring sight. The problem of diminishing of natural water supply is the biggest concern for the conservationists. The groundwater consumption has caused a drastic drop in the levels of Huacachina oasis lake, as the surrounding private landowners are accessing the precious groundwater by their installed wells. To prevent the drying up oasis, now waster must be artificially pump to protect this beautiful wonder. Huacachina has become a very popular tourist and adventure sports spot in the world. It is a famous destination for sand dunes buggy rides and sandboarding. Tourists, travelers, adventure lovers from all the world come from to Huacachina to climb the top of amazing sand dunes The place has a very dry climate with precipitation of just 2.5-centimetres per year. The annual average temperature of Huacachina village is 25 degrees celcius. Kashmiri Muslims Offer Prayers In A Shiv Temple On Mahashivratri. Urge The Pandits To Return Home
Meet Khushboo Patani, Disha’s Sister Who Is Equally Gorgeous & Talented As Her!