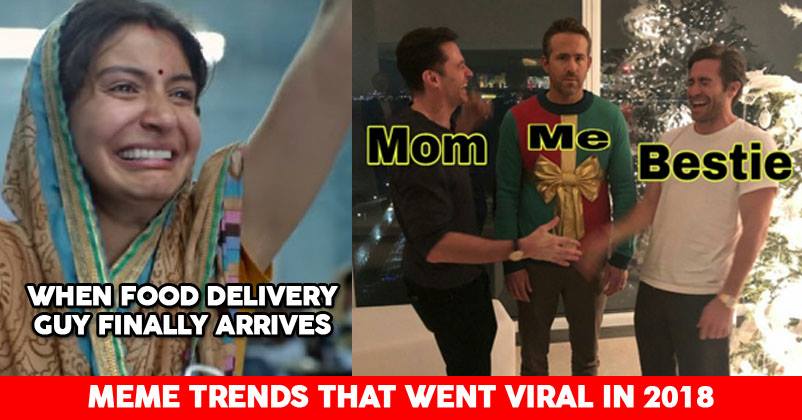 So,this is the last day of the year,where we are bidding adieu to the year 2018 and is all set to welcome 2019,with all new hopes and expectations.

This year there were many hit memes,which the netizens created from almost everything and anything that went viral for all the right reasons.Let us be thankful for that,which made this year very memorable.

Memes were created from scratch and did everything to amuse us virtually.From witty dialogue of a film to a funny candid picture of a celebrity,everything contributed to be the funniest of all.

Let us catch up on the viral meme trends that went to be on top of everyone’s news feed.

1.Radhika Apte-Netflix India Memes.
This year almost in every Netflix originals from India,Radhika Apte was in it.She ruled over our Netflix choices and even our shared memes were with due courtesy from for only.

2.Sacred Games Memes.
This is the first Netflix original show in Hindi,which broke all conventional stereotypes to become one of the best series ever.Especially the dialogue “Kabhi Kabhi Lagta hai ki apun hi bhagwan hai” by Nawazzudin Siddiqui became the most common ingredient for memes.

When you watch Sacred Games and Wild Wild Country back to back and realize there's a golden meme opportunity! @NetflixIndia pic.twitter.com/1Nzq97dRcG

3.Diego Maradona Memes.
Diego Maradona,the football legend is quite famous now also,to be a part of many memes.His priceless expressions regarding his team Argentina,left people all over the world laughing at the memes he got himself.

When you're at the Confederations Cup finals and sitting next to Diego Maradona but just got tagged in some dank memes. pic.twitter.com/CzH4BINj5w

4.’Sochta Hu Ke Woh Kitne Masoom The’ Memes.
This Hindi song lyric became a meme worthy tagline representing the false expectations we have about something or somebody and the reality about it or them.

5.Tell Me Something I Don’t Know from Simmba.
This dialogue by Ranveer Singh from his movie Simmba went viral into making memes,when the trailer released.This became famous instantly among the shared memes.

6.Anushka Sharma’s Sui Dhaaga Memes.
The actress became the highlight in the meme world,when stills were released from her film Sui Dhaaga.the trailer were praised more for her expressions than the film it about to give.

Priyanka Chopra’s veil is bigger than a 1 RK flat in Mumbai. pic.twitter.com/rV7CGPVuIM

8.Ryan Reynold’s Sweater Memes.
When Deadpool actor Ryan Reynolds’ picture of wearing an ugly sweater for Christmas went viral,it quickly made itself into memes along with his relatable expression on face.

9.Avengers:Infinity War Memes.
When the film’s trailer was released by the marvel Studio claiming it to be the biggest crossover,fans went crazy and also started making memes that went viral like the trailer itself.

10.’Ghar Se Nikalte Hi’ Meme.
This line from a Hindi song went viral after it released,to show the before and after condition of people struggling everyday on public transports and streets to reach their destinations.

This summer heat I tell you 😝

So,which one is your favorite?