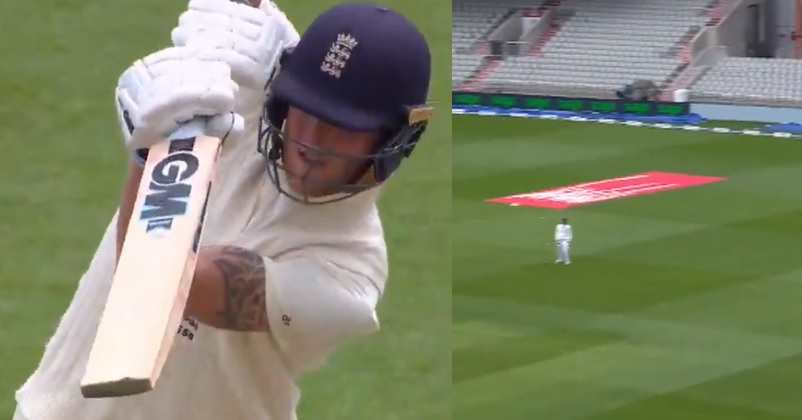 The world is now in the unlocking mode despite the fact that the cases of coronavirus are still on the rise. The good thing for cricket lovers is that England and West Indies are playing a series of three test matches in which West Indies has already won the first test match at Agaes Bowl.

The second test match is being played at Old Trafford, England, in which the visitors decided to bowl first after winning the toss. While the Jason Holder led team was in no mood to give England any chance of scoring much, the hosts were also very determined to bounce back in the second test match. Though England lost early wickets, Ben Stokes (176) and Dom Sibley (120) brought the team in a strong position by hitting centuries. England declared their first innings for 469/9 and West Indies was at 32/1.

Ben Stokes is considered as one of the finest all-rounders of the present times and during his knock of 176, he played a shot which was no less than ridiculous but gave maximum runs. He played this shot in the 115th over of the innings and the bowler was Alzarri Joseph. A full-length delivery was bowled by the pacer which was lofted effortlessly over the long-on by Ben Stokes. The shot was played with ease but the timing was perfect which made it possible for the ball to clear the boundaries for a six. England cricket also shared the clip showing the shot and called it ridiculous.

That is ridiculous @benstokes38! 😱

This is certainly a ridiculously great shot, isn’t it?

Chahal Shares A Pic With Rohit Sharma But It’s His Caption That Makes Ritika Sajdeh Go Aww
Harsha Bhogle Had A Funny Reply As Ashwin Wished Him On Birthday, Said “Leave My Job Alone”