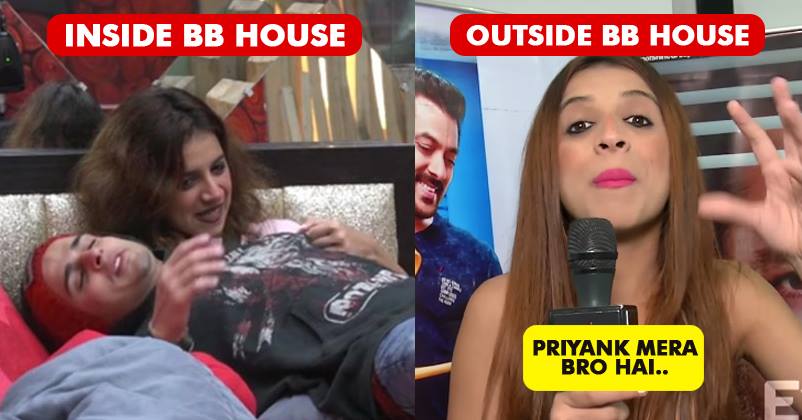 Bigg Boss is getting ugly day by day; Benafsha Soonawalla’s closeness with Priyank has been the most controversial topic on the show. Yes, the duo displayed some romantic moments in the show. This was not it; even Priyank’s girlfriend Divya broke up with him due to his intimacy with Benafsha.

They kept hugging and kissing each other and also shared the bed. Ben was slut shamed for acting so cheap.

However, there is a twist in the tale now. After coming out of the Bigg Boss House, Ben shared a different side of the story. She said that Priyank is like her brother.

Benafsha says that she treats Priyank like her brother. In her words, she gives him “Bro vibes”. Now, this has created an uproar on social media. Is a brother sister relation like this? Twitter is making fun of her sister…

Benafsha: Priyank is like my brother and i slept next to him as his sister or a puppy. IM DYING LMAAAO#BB11

Benafsha after coming out of the #BiggBoss11 house:

Disgusting these people are!

Did benafsha really call priyank her brother after getting evicted?????
Disgusting these people are😡 #BiggBoss11

Benafsha is saying on instagram that Priyank is like her elder brother
OMG 😮 she just degraded pure relationship of a brother sister
Who the hell cuddles a brother like that? Yuckk #BB11

Seriously, what’s wrong? Is a brother-sister relation so cheap?