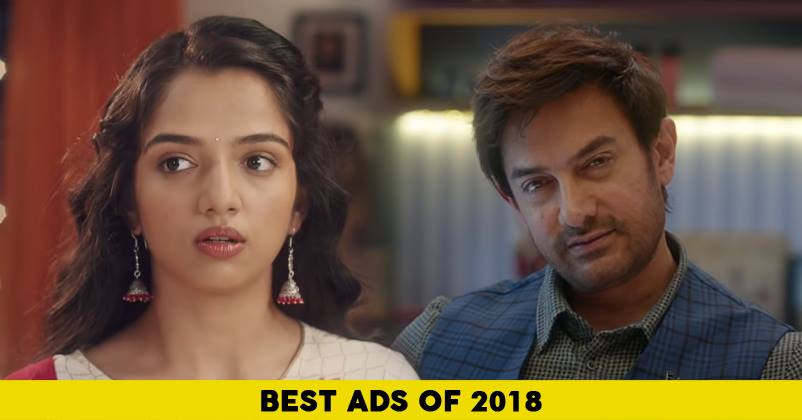 2018 saw a huge transformation for the way brands communicate with the audience. Advertisements have become more customer-centric and video is the best form of content are using. Also, we saw ads made for the social media generation as people spend a large portion of their time online by watching videos.

Wrapping up the year 2018, we have released a list of best Indian video ads. These ads have been chosen based on multiple factors such as engaging factor, popularity, message conveyed among many more.

For Ganesh Chaturthi, Brooke Bond Red Label launched – Shree Ganesh Apnepan Ka, a campaign to celebrate the spirit of togetherness. The video ad inspired by real-life stories, reveals some unknown facts about Bappa along with showing what this festival truly means to the people. The idea behind choosing this campaign is that it encourages everyone to open their minds and break the shackles of their own conceptions, beliefs and come together.

Arkade- ‘Bharadwaj – The bird with the Golden Wings’

We don’t get to see birds chirping around our homes due to several reasons like loss of habitat, changing climate, and harmful rays in the environment that affect bird populations. Arkade which is a popular name when it comes making residential projects with palatial and spacious flats, has started a new project named Arkade Earth to create self-sustained nature-themed homes that take you away from technical to the ecological. To promote this, the company launched a video that truly defines the benefits of living a lifestyle centered on nature, our roots. The way this ad shows the contribution of nature in keeping a family together is what we like the most.

HP India’s Diwali ad got praised all over the internet and made a lot of people cry. The video urges viewers to shop local and support street vendors. The ending of the video with “Support the street vendors, our lights brighten their homes too. #TuJashnBan Kisi ki Zindagi ka,” perfectly delivers the message HP India wanted to convey. It is a heartwarming commercial that communicates well with a powerful message and great execution.

Legrand launched a CLASSE 300 video door phone, which is a perfect combination of innovation and modernity based on the current need of consumers. This advanced door lock allows one to control the door via a smartphone from anywhere in the world.

The brand showcased four videos that capture the different scenarios in a modern day lifestyle where the customer is away from home while there is someone at the door. The quirky yet simple communication establishes the need and convenience of this connected device. The emphasis on connected living, the demand of modern day is effectively seen in the videos making them very relevant to the audiences.

Considering the increasing need for security and providing solutions with modern technology, we chose this campaign by Legrand in our list of top campaigns.

Meal of the Moment – Vending Machine

‘Meal of The Moment’ is a brand which has the potential to transform the Indian RTE market. To promote their vending machine which serves as an additional distribution point making meals available on the go, the company released a video ad. This ad shows the concept of how their food is made similar to homemade ensuring proper quality and nutritional value.

We have listed this commercial in our list because of the emotional content which makes the audience relate with the brand.

Being a brand popular for its wide range of products in Indian Ethnic wear, Sabhyata has been serving women with the aim to redefine ethnicity. Sabhyata decided to break gender stereotypes with their Diwali campaign. The video ad dared to show females in a fresh and confident avatar which we don’t get to see normally in Indian ads. Also, it highlights the need for gender equality in the correct manner.

The idea behind choosing this commercial among the best of the year is that this one is a perfect combination of brand promotion, delivering an important message to the audience and making the connection with customers stronger.

India is changing very fast, it is more driven than before, hungrier than before and demands more than before. The idea behind Datsun’s latest campaign #ExperienceChange is to encourage that change. This new Datsun GO ad is targeted at the new generation of consumers focusing on driving change with #Datsun cars built using Japanese engineering and modern design aesthetics. Choosing Bollywood actor Aamir Khan as brand ambassador for Datsun in India is helping the brand to connect with their audience which is bold, fearless and ready to change. This is probably the reason why #Datsun named the campaign #ExperienceChange.

The reason behind choosing this ad is the simplicity by which brand has conveyed the message through a powerful brand ambassador to the right audience. The campaign focused on the newer aspects of the cars and how they are suited for today’s generation with core premise of communication being – ‘what was enough then, isn’t enough anymore’.

Saregama Carvaan tried suggesting a point of view with its Diwali ad this year. The #ShorYaSangeet campaign suggested resolving the conflict between ‘noise and music’ and how the ‘noisy’ side of the festival can be replaced by music. The campaign gives a more meaningful way to connect with the young other than using yo-kids, high-fives, and all the stereotypes marketing uses to make brands youthful.

This Diwali, Mahindra Truck And Bus came up with a fresh idea with #GharKiLaxmi. The video showcased a contemporary woman in her all new avatar. Through this ad, Mahindra delivered the true essence of being a woman making an emotional connection with the audience.

This ad deserved the place among best ads of the year as it hit the right sentiments allowing them to get the attention of target audience. Also, not portraying the female character in the usual stereotypical roles makes it stand apart from the usual ones.

To educate the audience about their new car insurance plan- COCODrive, DHFL General Insurance launched a video ad that encourages people to give a second chance to everyone. With this, the brand is addressing millions of senior citizens in the country who somehow stop following their heart due to the norms of Indian society. The video celebrates going beyond socio-cultural stereotypes and giving yourself a second chance.

The monsoon floods are something that the whole Kerala is trying to forget. Especially the tourism industry has seen a major setback and people working in this industry are facing economic instability. Travel-based brand Samsonite has made a video advertisement that expresses what tourism means to Kerala and motivates tourists to explore the beautiful state. It features people involved in the tourism sector— taxi drivers, lodge managers, elephant mahouts who are eagerly waiting to welcome their guests.

The reason for picking this ad is the campaign’s mission that is to remind travelers about the beauty of Kerala and to inspire them to come together and revive tourism in Kerala.

For their Rakhsha Bandhan ad, Honeywell India gave us a new form of the brother-sister relationship. Breaking the norms is showing sisters traveling to see their brothers on this special day, Honeywell has shown what lengths a brother would go to be with his sister on Rakhi.

Relating brothers with the products of this brand makes us list this ad as one of the best.

For Diwali, Nerolac released a video ad which showed that the true essence of Diwali is not only about celebrations, but also about recreating memories that made our childhood beautiful. It expressed how Diwali makes us relive our fondest memories and how Nerolac has contributed to this by being a part of every beautiful memory since our childhood.

Nerolac gave us a new meaning about Diwali and how the brand has been a part of so many precious memories.

Ryan Reynold’s Ugly Sweater For Christmas Has Amused Netizens. Funny Memes All Over The Twitter
Irfan Pathan’s Pictures With His Wife Are Adorable,You Just Cannot Miss Them