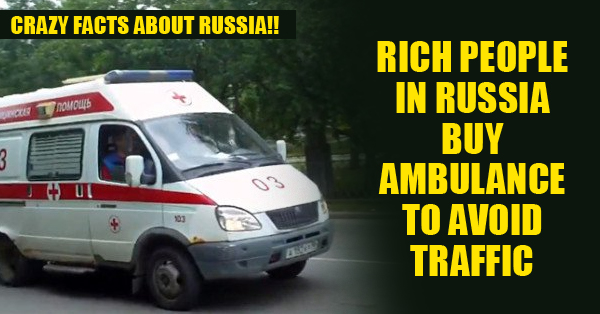 Russia is a country which has been always in the news. From the cold war to the recent Ukraine crisis, they amazed us every single time. These are the 10 insane things about Russia you didn’t knew before. Source
You think traffic in Indian cities is so bad? Well you didn’t experienced the traffic of Russia and China then. Rich people in cities like Moscow buy ambulances just to avoid traffic. Source
You think Delhi metro is the busiest and full of people? You think Rajiv Chowk station is full of crowd? You should check out condition of Japan and Moscow (Russia) then. About 9 million people ride Moscow metro every single day. Its about 4 times more than the number of people ride Delhi metro and is more than New York and London combined. Source
Lake Baikal is an ancient lake in the of Siberia, Russia and its the deepest lake in the whole world. Its total surface area is more than  4 times of Indian state Sikkim. And the most interesting thing is that it holds about one fifth of world unfrozen fresh water. Source
If you want to be a journalist, then Russia is not the right place for you. Since the 1992, 64% of all the journalist deaths in Russia were murders. And people call India dangerous for journalists.

Source
Alaska is a U.S. state, but its was once part of the Russian empire. The USA bought it for just 7.2 million dollars at that time (2 cents per acre). Alaska is the largest US state by area (Its size is more than half of India). In 2007, the GDP of Alaska was $44.5 billion. Source
Because Alaska is part of U.S.A. now, at the nearest point Russia and U.S.A. are just 4 km apart from each other.

Source
Long beard like Dan Bilzerian is in fashion these days. But do you know during the Peter the Great’s reign in Russia, anyone with beard had to pay tax. Source
Its is generally believed that Russia has about 15 secret cities with unknown names and locations. Source
You might now that Russians love Vodka, right? They love it so much that during the time of economic recession or high inflation people are sometimes paid in Vodka in Russia.

Continue Reading
You may also like...
Related Topics:We Bet You Didn't Knew These Insane Things About Russia