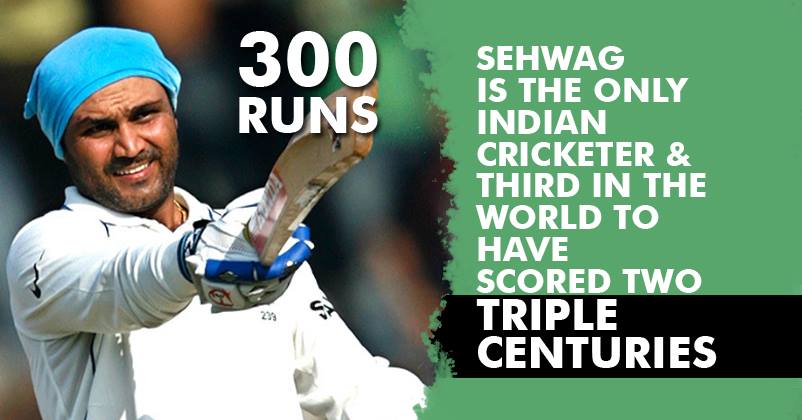 First three balls of his innings ending up in stands for sixes and that’s what Virender Sehwag is for you. This incident is from the T20 match played against New Zealand in Christchurch on 25 February 2009. Fearless like storm and courageous like a lion, that’s how the world knows him. Virender Sehwag made his first class debut in 1997/98 and from there, there was no turning back. He booked enormous records in his name during his journey of 18 years while playing Cricket. And pointing out 8 amazing facts about him is indeed a trouble because every there are plenty of amazing facts and choosing the best out of best in indeed a pain in the ‘ARSE’.

1. Sehwag was banned in his Test Debut Match His debut match was against South Africa at Bloemfontein, Nov 3-6, 2001, but it didn’t quite turned out good for him. He was banned by the MATCH REFEREE Mike Denness for over appealing more than required. Certainly a Delhi WALA, saying more than required ! ! (Stereotype Intended)

2. He was once booed by many Bangladeshi Cricket Fans. Sehwag’s comment on Bangladesh Cricket Team as a mere ‘ORDINARY’ team earned him quite a lot of hatred from the Bangladeshi Cricket Supporters. As a result, after winning a Test Match against Bangladesh, he had to go through a lot of bantering and boeing while he was on his way for the post match conference.

3. During 2011 World Cup campaign, Sehwag was the one to launch 1st boundary of India’s innings on the very first ball in 5 consecutive matches. There is reason why we called him the most destructive batman of our era.

4. The God of cricket himself seeks motivation from Virender Sehwag to play when he is in ‘NERVOUS 90s’ Sachin Tendulkar has said this many times and he stand by it. Virender Sehwag never gives second thoughts about negativities while he is batting. He just goes after the bowler. It is always do or die for him.

5. Sehwag’s father once banned him from playing cricket, however his mother helped him come clean ! ! Virender Sehwag was once injured by a nasty blow from a cricket ball which tossed his tooth out of his mouth during a cricket match. His father was angry and concerned too and therefore banned him from playing cricket. However, his mother helped him and uplifted the ban.

6. Apart from his father, Virender Sehwag was once slapped by John Wright because of his poor performance. Yes, the most destructive batsman was once slapped by John Wright. However, an apology was expected by John Wright by Sachin asked Sehwag to keep this issue at bay as John Wright was like a father figure to everyone in the dressing room. Virender Sehwag generally avoid speaking of this incident out in public.

7. Virender Sehwag has a doppelganger and he is a Software Engineer Yes, there is indeed another Virender Sehwag with more hairs on his head and he has a much tougher job to do. He is a Software Engineer. His name is Girish Mallenahally.

8. He has the most epic sense of humor in the entire Indian Dressing Room. Considering his recent friendly banters with Shoib Akhtar in commentary box, it certainly seems that he doesn’t miss any opportunity to a dig on his friends ! !

Aren’t these facts and untold stories amazing ? If you some more other than usual record breaking facts, share it with us in the comment section below ! !

The Romantic Story Of How BAND-AID Was Invented
Dasha Avatar Is Theory Of Evolution In Real Sense!!