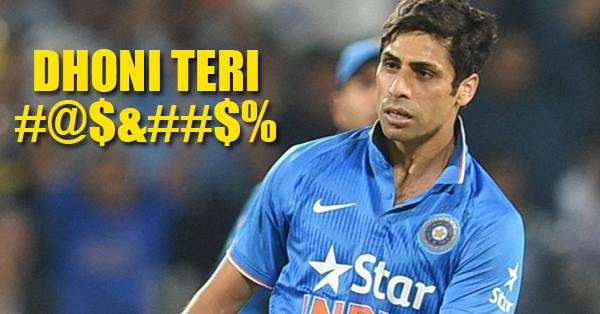 Yes, you heard it right! Ashish Nehra had abused Mahendra Singh Dhoni. This had happened long before Dhoni led India, much before he was the 1st captain for winning the World Cup and T20 Champions trophy and much before Ashish Nehra went on for playing under Dhoni for Chennai Super Kings and India. This had happened when Ashish Nehra was a senior player in the team and had played many more matches as compared to Dhoni. It was a One Day International between India and Pakistan. This was when Shahid Afridi got a go at the away going delivery of Nehra. The ball had travelled between the wicketkeeper and it slipped.

Ashish Nehra used some unpleasant words for MS Dhoni after the latter missed out the catch. That time, Ashish had no clue that the young wicket keeper would become so successful today. So, do you want to watch the video? We have it right here for you… take a look!

This 70-Year-Old Had Fixed Deposits Worth Rs.2 Crores But Still Lived And Died Like A Destitute!
We All Loved Aarfa In Sultan’s 2nd Teaser! But No One Knew Its Copied From Here!