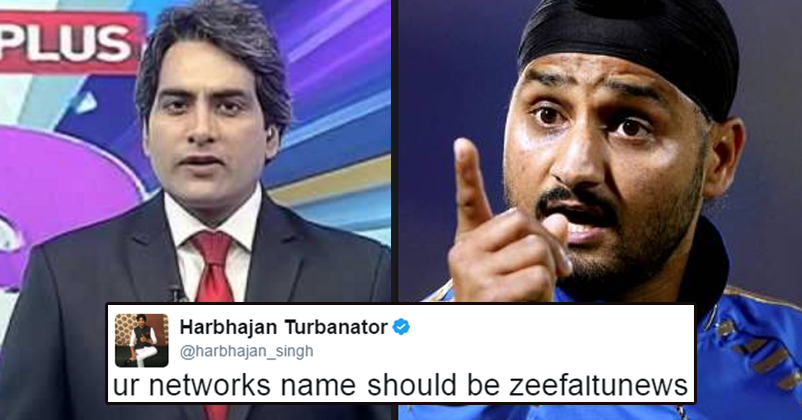 Nowadays, media has forgotten its limits. Instead of reporting things in a subtle way, journalists prefer sensationalizing the news and using harsh words. Sometimes, celebrities and sports persons ignore these reports, but at times, they can’t help but smash these media houses.

Something similar happened with Harbhajan Singh. He lashed out at Zee News for carrying a pathetic report about him and Virender Sehwag.

Not only this, Zee News also quoted R Ashwin for giving this information. According to the reporter, R Ashwin had given them this information in a chat show. Have a look at this tweet of the news channel;

After seeing this news, Harbhajan Singh lost his cool and smashed Zee News. This report didn’t go down well with him, due to which he said Zee News should be renamed as “Zee Faltu News”. Here’s his tweet…

His tweet read, “Kuch bi ?????.. ur networks name should be zeefaltunews”

Fans supported him and lashed out at Zee News; here’s what they tweeted…

Hahahaha what a name it suits perfectly on zeenews

What’s your opinion on this? Don’t you think Zee News should have reported things in a subtle way? Share your thoughts with us in our comments section below.