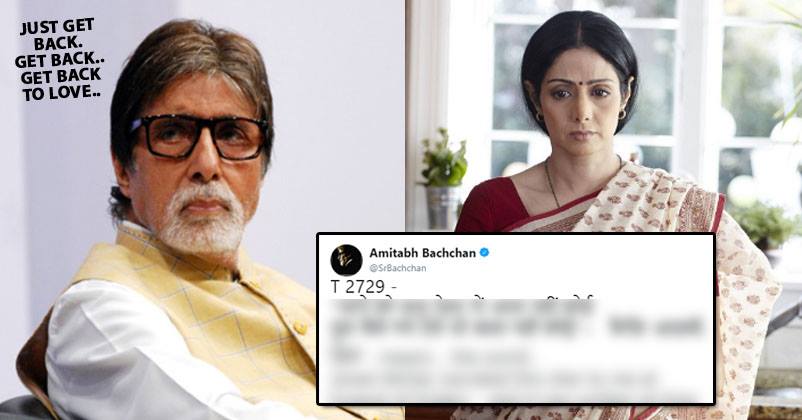 Amitabh Bachchan is very active on Twitter and he has been continuously tweeting about the loss Industry has suffered by the sad demise of the legendary actress Sridevi.

If you remember, people also said that he had a premonition about Sridevi’s death, because he tweeted of a weird “Fear”.

Amitabh Bachchan is too good with words & we have seen that time and again. When Sridevi expired, his Twitter handle was completely silent. We could feel the pain he’s going through.

However, yesterday, he once again took to Twitter to express his sadness over the loss of actress.

Amitabh Bachchan tweeted a Shayari by Javed Akhtar dedicates to Sridevi’s death. He said that Javed Sahab has narrated the same to him at Sridevi’s funeral. The said was written for Guru Dutt’s sad demise but was more apt for the day.

देहर – means .. the world .
Javed Akhtar narrated this sher to me at funeral of Sridevi .. said it was written at time of Guru Dutt demise ; but so appropriate for today ..

Sridevi and Big B have done a couple of movies together and they were very close. Just as the whole industry is in a state of shock even Big B is quite disturbed by her sudden demise.

SRK Posted A Cryptic Tweet After Sridevi’s Funeral And People Are Asking Him To Quit Smoking
First Pics Of Sridevi’s Last Rites In Crematorium Are Out. Boney Is Performing Rituals