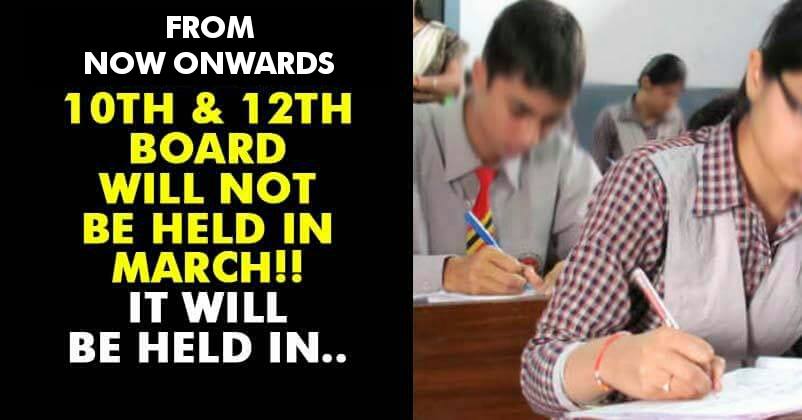 CBSE remained the topic of discussion this year due to some major failures. There have been numerous requests regarding re-verification from the students, which led the board to set up 2 panels for finding loopholes in the evaluation process. The board doesn’t want to repeat this and is planning to take some important decisions in the upcoming year to avoid similar conditions in the future. The most important one is to conduct the final board exams of 10th & 12th in February itself. The proposal is still in its initial stages and has been put forward so as to accommodate the undergraduate admissions which either begin before or immediately after CBSE announces the board exam result.

The rule will be applied from the year 2018 if the proposal gets the approval. Speaking to NDTV, a source from CBSE said-

“A proposal has been generated to deliberate upon the possibility of conducting board exams from mid-February taking into consideration various processes and preparations in the administration of exams. The purpose is to have more time for evaluation and bring quality. The board will involve all stakeholders in the process.”

The new rule will apparently help the board to declare the result earlier than before. This will also give students enough time to apply to undergraduate colleges, but will also bring relief to students appearing in entrance exams. This year the JEE Main exam was scheduled immediately after the board exams for class 12th got over so, with the help of this new rule, situations like these may get avoided. What do you think about it? Is this a correct and the last way to solve the problems? We fear it may end up adding some extra pressure on the mind of students as they will need to get ready for the exams early.

Continue Reading
You may also like...
Related Topics:CBSE, India

This Is Unbelievable! Rohtak Nirbhaya’s Brother Booked For Raping A Widow & Robbing Her!
AC Wasn’t Functioning In Air India Flight! Passengers Were Breathless & Had To Use Paper As Fans!