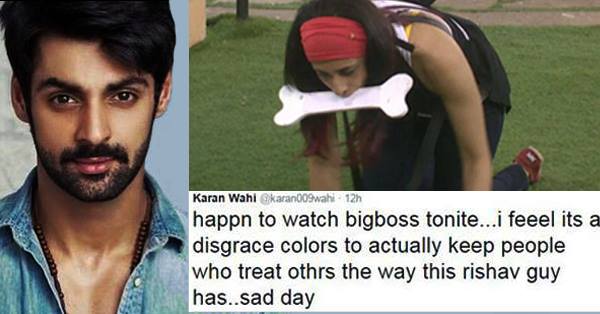 No one can deny the fact that Bigg Boss 9 has proved itself to be the worst show of this series and nothing is working right for them. The contestants have not been able to ignite any excitement among the audience, the timing of Bigg Boss has also affected the viewership, the producers are losing their money as in a bid to retain Salman Khan as a host, they paid him the double of the last year and Salman has been also ineffective in increasing the TRPs.

In an attempt to increase the TRP, the makers of the show have done something which has shown that their level of frustration is really dangerous.

All those who haven’t watched the episode, let us tell you what happened: Bigg Boss house was converted into a hotel and the super hot Mandana Karimi with the wild card entry Rishabh Sinha was the guest while all the other house members were made to work as servants. Rishabh started playing strange games and made the other housemates do some tasks which were really bizarre and inhuman. He asked Kishwer to fetch a bone like a dog which he had thrown and bring it back to him, which Kishwer did, however she spitted it into Rishabh’s glass.

This episode has earned a lot of criticism for the makers of Bigg Boss 9 and Colors channel too and one of them to speak up against it is an actor Karan Wahi and it is commendable on his part more as he is also working in a show “Comedy Night bachao” of the same channel.

Karan expressed his opinion on twitter and there he bluntly criticised the channel for their disgusting tactics to increase TRP and also slammed them for taking a contestant like Rishabh Sinha in the show. Here are his tweets:

kishwer merchant … respect fr u to actually go thru things like this …. @ColorsTV everythn is nt trp guys …humble request..its a show

Well, we appreciate Karan Wahi for being so honest and straightforward, despite the fact that he is also working for the same channel in another show.