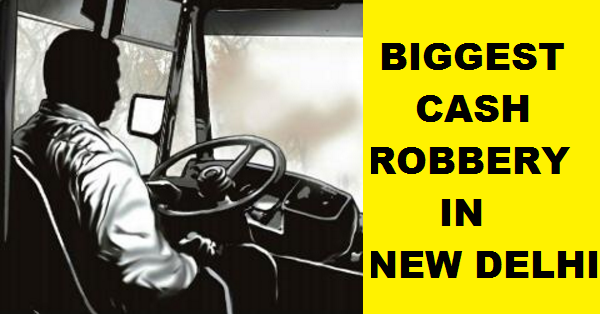 The biggest cash robbery of New Delhi was carried out in the Govindpuri area on Thursday in which the driver of a cash transit van has said to ran away with cash around Rs.22.5 crore.

This incident happened when the armed guard who was accompanying the driver asked him to stop the van near Govindpuri metro station so that he can answer the nature call. Pradeep Shukla, the driver said that he will be waiting for him in a lane nearby but when the guard returned he found no one, as told by the police.

Vinay Patel, the guard immediately informed this to the branch of the concerned bank whose cash they were carrying and bank officials called the police.

Police was told by the bank that they had sent four vans for cash transit and total cash amounting to Rs. 38 crore was being carried by them, out of which the van (DL 1LK 9189) which got disappeared was carrying Rs. 22.5 crore. However, the exact amount robbed can be ascertained only after the accused is arrested, as per the police.

A specialized crime team has been formed and police officials from two subdivisions have been assigned the case, the van was found near a petrol pump which was near to the spot, however the cash boxes were missing.

Senior Police officials have denied any chance of robbery and said that is a criminal breach of trust. Police has started making efforts to catch the accused by setting up check points, and increasing the checking on the borders and also examining the eye witnesses.