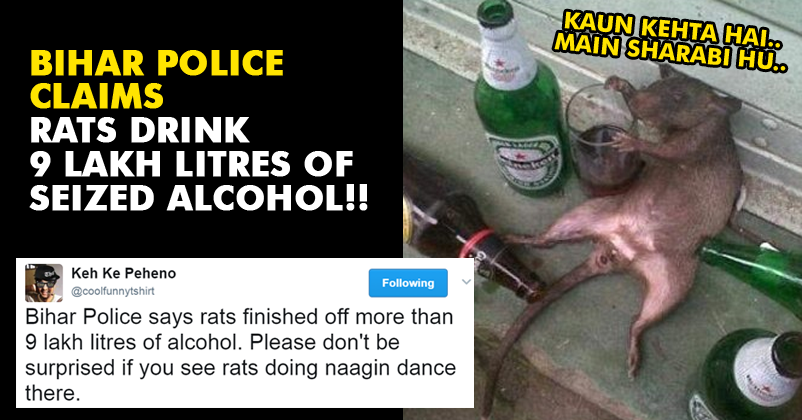 After Nitish Kumar’s govt. banned liquor in Bihar state, even rats are going mad to have it. No matter how hard it is to belive or how silly it seems, but Bihar Police seriously believes this theory.

Recently when 9 lakh litres of seized alcohol went missing from Bihar Police Station ‘Malkhanas’, they said that half of the liquor got destroyed on the way to Police Station and rest of it was consumed by Rats after chewing the sealed bottle caps. However, the police today arrested the president of Bihar Police Men’s association, Nirmal Singh and a member of the association, Shamsher Khan for being heavily drunk during a special check. They will be in judicial custody till 18 May.

Now, this was the best thing for Twitter trolls who started doing what they are famous for.

Check out how badly they trolled Bihar Police. LOL.

Scenes from Bihar where a drunk rat, unable to walk is carried home by his wife… pic.twitter.com/tCPm5uFNNm

Bihar police is awesome.The rats of their thana know how to open bottles and pour drinks. Wow, shud be in guinness book of world records

This also reminds us of an epic Thug Life comment by Lalu Prasad Yadav when he was asked a question on Aap Ki Adalat. Have a look;

Jokes apart, we think this is really irresponsible on the part of Bihar authorities. They are expected to protect the laws instead of breaking them and then trying to cover up with such silly excuses. Who will take them seriously if they continue to make fun of the law like this?

Four Convicts Of Nirbhaya Gangrape Case To Be Hanged Till Death! Finally Judiciary Making Sense!
Your Blood Will Boil After Hearing What The Lawyer Of Nirbhaya’s Rapists Said On The Verdict