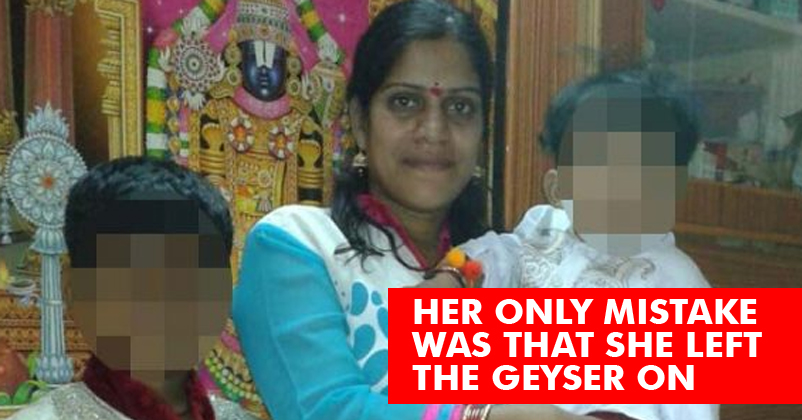 She was beaten to death and was found hanging from her stole on Sunday. The wife of a software engineer in Hyderabad suffered this terrible fate for one small mistake, she left the geyser on for hours. Her husband, a software engineer saw that the geyser is still on, he became furious and started hitting her violently. The wife texted her family, informed them how she was badly beaten for running the geyser too long. 31-year-old Susrutha who was married to a software engineer named Mohan Rao in Hyderabad messaged her father to inform him about the beating. Hours later she was found dead hanging from her stole. In her last message, she said that her husband Mohan Rao had dragged her out of the bathroom and physically assaulted her in front of his parents and two sons, who are six and four years old.

She also spoke to her parents, she described them all the tortures inflicted on her, how she was humiliated and beaten in front of her kids. Her father Satyanarayana comforted her, told her that they would reach to her as soon as they could.

Soon after the call Satyanarayana and his wife hurried to their daughter’s house. But by the time they reached Susrutha’s home in Hyderabad from Nalgonda, which is about one and a half hours away, they were told their daughter had hung herself to death.

The police have arrested Mohan Rao and his parents. Susrutha’s older son told the police how his father had beaten his mother to death.

Susrutha’s parents filed a complaint with the police, they narrated the entire incident to the police, described how their daughter was brutally beaten and humiliated by Mohan Rao (Husband) and his parents.

Susrutha’s uncle Madhusudan said Susrutha’s husband and his family had harassed her for years. He said,

“They were harassing her for dowry even after two sons.”

Still it’s hard to believe that such things can happen in the twenty-first century India. We talk about respecting and educating girls, and yet girls being molested, woman beaten to death, such disgracing things are happening all around us. On the top of that, the guy who had beaten her wife to death is a software engineer, he’s educated. This is completely barbaric. Guys, share your views and opinions on this matter in the comments.

The Guy Hated Her Dog So She Rejected His Marriage Proposal!
Hike Messenger Vs WhatsApp, It’s On! And Why You Should Use The Desi Hike!