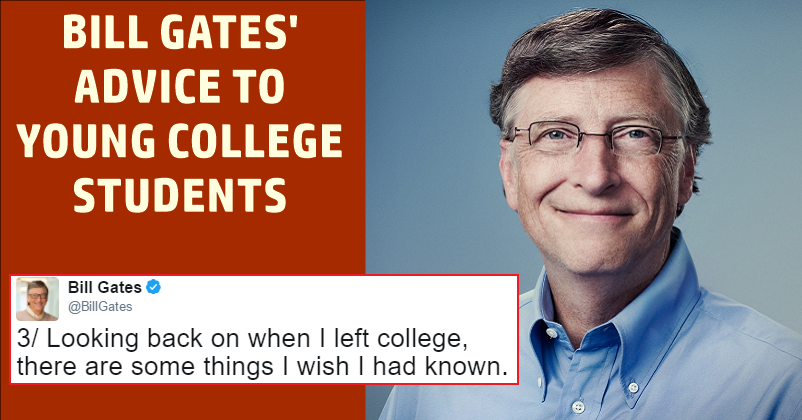 We always want to know the secret mantras of successful people, right? People wish to follow big personalities in order to get some knowledge from them, which will lead to making the right choices in life. What’s better than getting some enlightenment from the richest man of the world, Bill Gates himself? The 61 year old has achieved a lot in life, in spite of being a college dropout. We salute him for that! However, he has certain regrets in life and wants that one should take care of all those aspects.

Everyone loves to listen to the most powerful man in the world & this is why he has shared some valuable career tips through his Twitter handle.

His series of 14 tweets are filled with his regrets, opinions, ideas and experiences. We can say that they are pure gold and have the capability of changing someone’s life.

And he starts his sharing session!

1/ New college grads often ask me for career advice. At the risk of sounding like this guy…https://t.co/C68mjJ5g44

According to Bill Gates, these are promising fields!

2/ AI, energy, and biosciences are promising fields where you can make a huge impact. It's what I would do if starting out today.

3/ Looking back on when I left college, there are some things I wish I had known.

4/ E.g. Intelligence takes many different forms. It is not one-dimensional. And not as important as I used to think.

5/ I also have one big regret: When I left school, I knew little about the world’s worst inequities. Took me decades to learn.

You know more than I did!

6/ You know more than I did when I was your age. You can start fighting inequity, whether down the street or around the world, sooner.

7/ Meanwhile, surround yourself with people who challenge you, teach you, and push you to be your best self. As @MelindaGates does for me.

How he measures happiness!

8/ Like @WarrenBuffett I measure my happiness by whether people close to me are happy and love me, & by the difference I make for others.

9/ If I could give each of you a graduation present, it would be this–the most inspiring book I've ever read. pic.twitter.com/P67BuvpELJ

10/ @SAPinker shows how the world is getting better. Sounds crazy, but it’s true. This is the most peaceful time in human history.

11/ That matters because if you think the world is getting better, you want to spread the progress to more people and places.

12/ It doesn’t mean you ignore the serious problems we face. It just means you believe they can be solved.

I love my work!

13/ This is the core of my worldview. It sustains me in tough times and is the reason I love my work. I think it can do same for you.

Make the most of it!

14/ This is an amazing time to be alive. I hope you make the most of it.

Bill Gates’ mind is filled with simple thoughts and the only thing he does is works with dedication. Today, life is very complicated and amidst this, it’s very difficult to achieve success, but if you follow these tips shared by the legend, you can definitely make a difference.

Forget Bride & Groom, This Cute Dog Stole The Limelight At The Wedding! Watch Video
Pervert Was Secretly Making Her Video But When Girl Noticed, She Taught Him An Unforgettable Lesson!