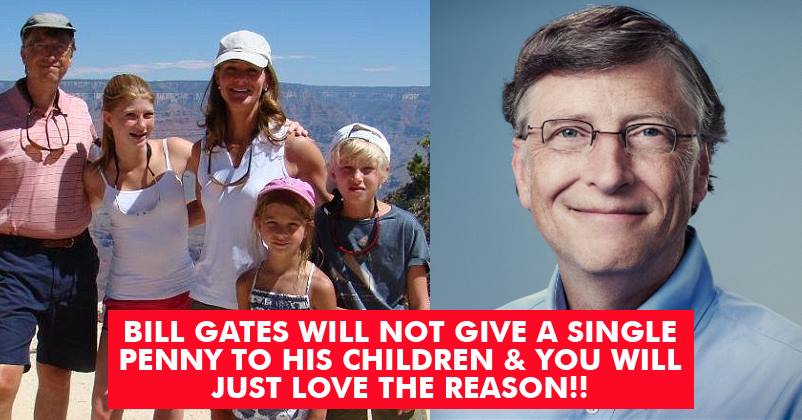 If all your life you were cursing yourself for not being born in Bill Gates’ family, then this news will come as a relief on your wounds.

In a candid interview, Bill Gates’ revealed that he won’t be leaving any money for his children. The 61-year-old Microsoft founder, Bill Gates is known across the world for his generous deeds. He has always used his uncountable wealth for helping others and for donating it to charity. Though in the past, he has already donated $28 billion through Bill and Melinda Gates Foundation but now he has no plans for repeating the same. He is very clear about not leaving his money for his children.

Unable to believe us? Take a look at these tweets…

You might be feeling that this is unfair on his children’s part but they are perfectly fine with their father’s decision!

Even in the interview, Bill Gates’ made it clear that his children are proud of his decision. He later explained that instead of giving them a huge sum of money, he will provide them the best of the best education that will help them to become what they want. That education will help them to make their own name and kick start their own businesses. Though he will be keeping an amount safe so that his children can use it in the case of any need.

“Our kids will receive a great education and some money so they are never going to be poorly off but they’ll go out and have their own career,”said Bill Gates

He also expressed that it’s always good to let children make their own path rather spoon feed them. This will help them to make their own career and own money! Bill Gates has already started showing his children a right path towards a good life. His eldest daughter is pursuing her studies at the prestigious Stanford University, California. Rory and Phoebe are still in school and lives with their parents outside Seattle, Washington. His decision has been accepted by his children who are all set to create their own career and earn a name for themselves in this world with their own hard work.

Check out his whole interview here…

What do you think about Bill Gates decision? Is he doing right with his kids? Do share your views with us in the comments section below!

Carla Dennis, The Hottest Model On Instagram, Is Driving Internet Crazy With Her Pics
This Girl Took Such Revenge On Cheating Boyfriend That He Won’t Forget For Next 17 Yrs