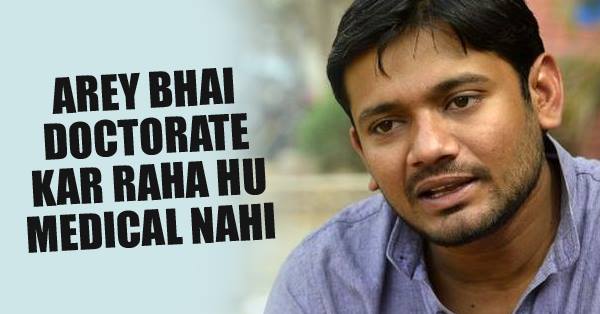 Kanhaiya Kumar, Students Union President of JNU, is surrounded by controversies for some time which don’t seem to end soon as recently, Hindu organization expressed its concern with regard to “treatment that will be meted out to his patients” after Kanhaiya’s doctorate will be completed.

Veer Sena’s Niranjan Pal asked, “We know that he (Kanhaiya Kumar) is pursuing his PhD from JNU and he is threatening to break the nation to pieces. How can a person like him serve the patients who will approach him after he becomes a doctor?”

Veer Sena is part of right wing organizations’ group that is determined for stopping Kanhaiya so that he can’t address Mumbai crowd on 23rd April. On being informed that he Kanhaiya is studying literature and not medicine, Pal stated, “So? He will become a doctor anyway and patients will approach him.” Many organizations that consider themselves to be “patriotic and devout Hindu organization”

A press conference was held by many organizations that consider themselves to be “patriotic and devout Hindu organization” in which they warned Mr. Kumar that he might not return in a good condition if he comes to Mumbai.

In the words of Swarajya Hindu Sena’s national president Sushil Tiwari, “This is not an action, but this is a reaction. Those who are indulging in anti-national activities should be stopped and we will do whatever is in our power to do so.”

Hindu Govansh Raksha Samiti’s Vaibhav Raut is of the opinion that there ought to be a ban on JNUSU President so that he can’t enter Mumbai since Kanhaiya would “spoil the city’s atmosphere”. Raut went on to say that “According to us he should not be allowed to live in India.”

As per Jayesh Tikhe who is a lawyer by profession, Kanhaiya would be stopped to deliver speech in the city by making use of constitutional methods.

Now If You Are Caught Taking A Selfie Near The Train, You Would Be Jailed Directly!
Twitterati Went Completely Crazy As Soon As Chetan Bhagat Tweeted! They Kept Trolling N Trolling!