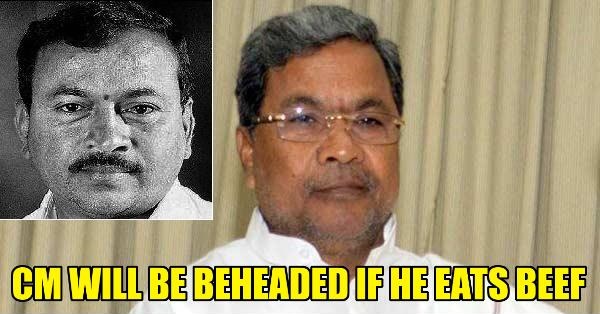 The Beef controversy is not getting calm down; in fact the politicians themselves are not letting the controversy die. After the Dadri murder case in which a Muslim, Mohammad Akhlaq was killed by an angry mob just on the basis of a doubt that he and his family killed and ate a cow, the fight over beef is increasing day by day.

Just recently, Congress leader and Karnataka’s Chief Minister Siddaramaiah made a declaration that till now he hasn’t eaten beef but now he will start eating beef, on Sunday he again repeated his statement, when he said, “Till date I have never eaten cow meat. But if it suits my palette and if I want to eat beef, I will eat it. Nobody can stop me and I don’t get bogged by BJP protest.”

In response to Siddaramaiah’s statement, a BJP leader has warned the CM and challenged that he will be beheaded if he ate beef at Gopi circle in Shivamogga.

During the protest meeting of BJP on Monday, S N Channabasappa, and the Ex-President of Shivamogga City Municipal Council said, “Chief Minister Siddaramaiah is behaving like a dictator. He has stated he would eat beef if he chooses to do so and nobody could stop him. Let him eat beef at Gopi Circle in Shivamogga. If he does so, he will be beheaded. We won’t think twice about that. By making such a statement, the Congress leader has hurt the sentiments of Hindus. We have all grown up drinking cow’s milk.”

Another leader of BJP, M Shanker, who is also the spokesperson of BJP’s Shivamogga district unit said, “If he eats beef, then Congress workers will eat dog, fox and so on to appease him and get the posts of chairmen of boards and corporations.”

Do you think the politicians who are responsible for creating harmonious environment in the country are themselves involved in its degradation? Share your views about the article in the comments section below.