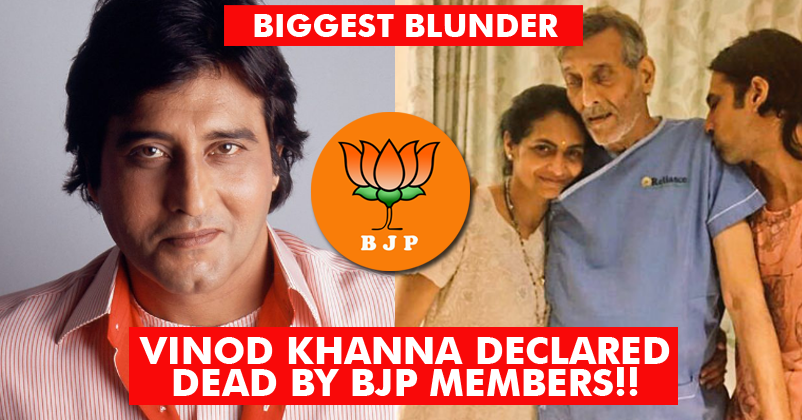 Social media users can make things viral in no time; few days back, a picture of Vinod Khanna was released online, in which he looked extremely weak. Rumors about the actor suffering from cancer started surfacing over the internet. Soon, news about his death spread like wild fire and shocked the netizens. His fans got a sigh of relief when they realized that these were nothing but rumors.

In reality, Vinod Khanna was admitted to the hospital due to severe dehydration. Even the hospital released an official statement about his speedy recovery. Spreading rumors is bad, but believing in them is even worse. Meghalaya BJP members did a big BLUNDER by believing in these fake reports; they declared Vinod Khanna dead and observed a 2-minute silence for him too. Yes, they actually mourned the actor’s death after watching some misleading news on TV.

A death hoax was spread online and some BJP members fell prey to it. Check this video on Twitter in which they observed 2-minutes silence.

David Khansati, the General Secretary apologized for this mistake and said,

“We wrongly observed two-minute silence and we are extremely sorry about it. We wish Khanna a long life. Two of our members watched TV and informed us about his demise and we believed it without verifying. We have issued a statement apologising for the grave mistake that we made. Please cooperate.”

Some Twitter users slammed the media and these leaders; check what they tweeted…

How can the leaders be misinformed?

How cn thes leaders be so misinformed n.incommunicative tht they culd consider a living actr dead n condole him despite his being alive

Observed for ? Hello Vinod Khanna is still alive .. am seeing a BJP Former Rajya Sabha MP from Punjab in it .. What has happened to him ?

Media plays a big role in spreading such rumors; journalists should inform people and not confuse them. By circulating fake news, reporters are breaking millions of hearts.

What do you think about this? Share your views in our comments section below.

Confused About Jio’s Latest Announcement? All Questions Answered In Simplified Manner!
Guy Ditched A Group Trip At End Moment! What His Other Friends Did Is Called The True “Jugaad”!