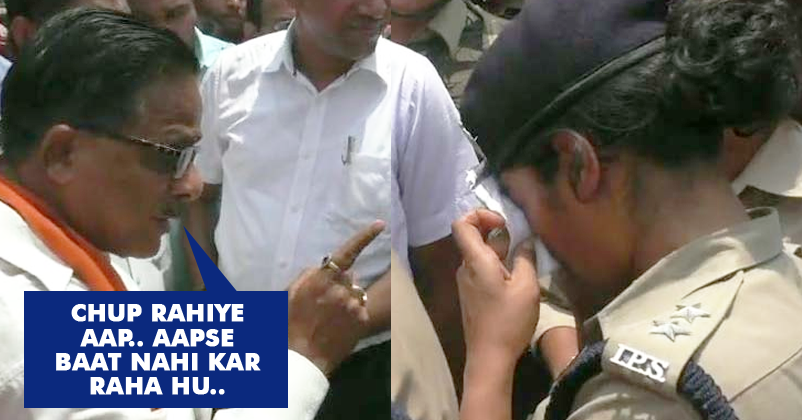 What happened was a group of women blocked a road near the Koilhwa village alleging the complicity of the police and the administration in the sale of illicit liquor in the area. The situation got nasty when there was a fight between the women and the police present at the spot. As per the police, there was stone pelting from the crowd after which there was a lathi-charge which lead in causing injuries to some women. This is when Gorakhpur MLA and a famous doctor, Dr Radha Mohan Das Agarwal reached the spot and fell in an argument with IPS Charu Nigam.

You can also check the video directly on Youtube.

In the footage, Dr Agarwal is noticed saying,

To this the officer Charu Nigam replies,

“I am the officer in charge here. I know what I am doing,”

A senior officer then arrives on the spot, while Ms Nigam takes a handkerchief and can be seen wiping her tears.

Dr. Agarwal said he did not misbehave with the officer.

“We are against the operation of liquor shops. People were peacefully protesting against the liquor shops, but the woman police officer forcibly removed the protesters and while doing so, she hit a woman and dragged an 80-year-old man. This simply cannot be tolerated,”

He also alleged that there was a tacit understanding between the police and the liquor mafia as a liquor shop closed 15 days back had suddenly started doing business again.

Why should I apologise? I was talking to her senior when the woman officer interfered. Police lathi charged people, old, pregnant women were thrashed by the police in the name of controlling crowd. I don’t accept any accusations,”

“मेरे आँसुओं को मेरी कमज़ोरी न समझना,
कठोरता से नहीं कोमलता से अश्क झलक गये।
महिला अधिकारी हूँ तुम्हारा गुरूर न देख पायेगा,
सच्चाई में है ज़ोर इतना अपना रंग दिखलाएगा ।
To everyone who has turned up in my support:
My training hasn’t taught me to be weak. I just did not expect that my SP city Ganesh Saha Sir would outrightly reject the irrational argument and talk about my injury. Before sir came, I was the seniormost officer in police there but when sir came and stood by the force, I got emotional .
Media has taken this stand because everyone of them saw both the incidents and this shows the positivity of media in Gorakhpur. I am thankful to them to have shown the truth with least manipulation .
I believe that good gets good and that’s why I have got the support of the media .
Please stay calm! I am fine and slightly hurt. Nothing to be agitated or worried about .
Regards
Charu”

Continue Reading
You may also like...
Related Topics:BJP, Gorakhpur, India, UP

Sunny Leone Takes Up A Creepy Cricket Stump Challenge! What Happens Next Shows How Brave She Is
This Pilot Proposed To Air Hostess On Flight & It Is Indeed The Most Romantic Proposal Ever!