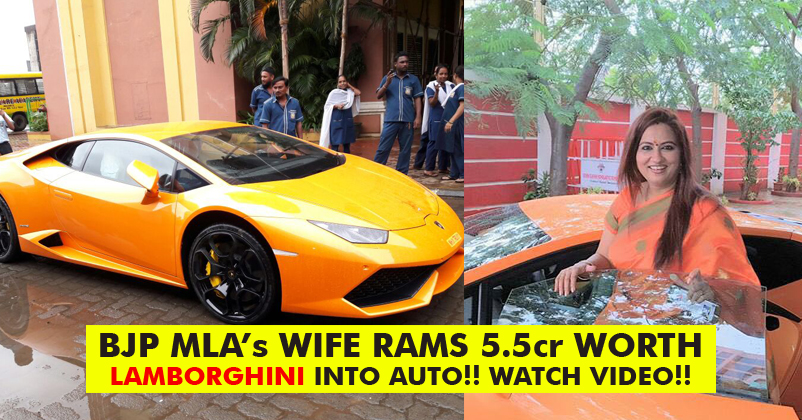 I would be lying if I said I won’t cry after crashing my car even if I was rich. And it takes a special talent to not to drop a pinch of tear when your newly bought high speed, super aesthetic, 7-speed Dual-clutch transmission Lamborghini Huracan crashes into a rickshaw. Really, it does requires eyeball of steel ! !

This is the very same car which picks up a speed of 100 KMPH within 3.2 seconds. And ironically, it also took just 3.2 seconds for crashing it into a rickshaw. The saffron color Lamborghini Huracan was gifted to Suman Mehta by her Husband Narendra Mehta who happens to be a BJA MLA. This unfortunate incident occurred on Mira-Bhayandar road which is in Thane. After receiving the delivery of the brand new luxury car, Suman Mehta gave a thought to drive it around. However little did she know that this time she would end up crashing it and ramming it against an auto rickshaw.

However, her husband Narendra Mehta defended her by saying “My wife has 18 years of experience and has driven an Audi and other imported cars. The car just touched front of the auto and it was not damaged. Road side mechanics cannot repair the car, which is currently parked in school premises,”

According to an eyewitness, Suman Mehta lost her controlling while taking a turn which eventually ended up hitting the autorickshaw parked opposite to a school. Fortunately there were no casualties. Although in the video it can be seen that two-three women narrowly escaped their death. The rickshaw owner was furious after the accident, however he was given compensation for this. Well, apart from this news, the questions which is now being raised is How come an MLA can afford a whooping 3 Crore worth sports car. Many people are speculating the involvement of black money into it. What is your opinion regarding this topic. Please share your views in the comment section below.