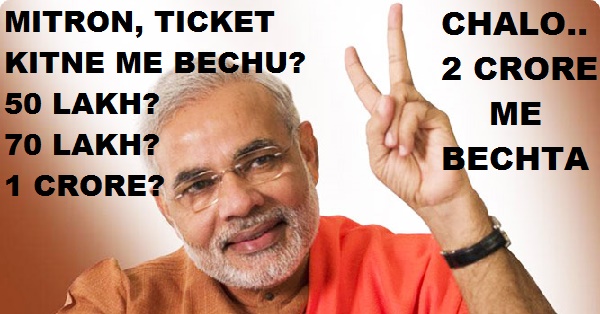 As the election fever is rising in Bihar, the signs of discontent are clearly visible in Bhartiya Janta party Bihar Unit. One present MLA of the party has alleged that the election tickets have been sold in the state by the party. Vikram Kunwar, BJP MLA from Raghunathpur has alleged that the party has sold Bihar election ticket to the ex-strongman and RJD MP Mohammad Shahabuddin’s shooter.

This claim has been made by Vikram after his candidature has been rejected by the party and he was not given the ticket for upcoming Bihar Assembly polls. Vikram Kunwar has alleged that party has sold the ticket for Rs. 2 Crores to Manoj Singh, who was a shooter of Shahabuddin and presently also, he is involved in illegal activities.

Vikram Kunwar said, “I would have no issue if the ticket was given to a party worker. But it was given to a criminal. He (Manoj Singh) is a criminal accused of land grabbing. He is identified as Shahabuddin’s shooter. This deal is of over Rs 2 Crores. None of the BJP leaders have come forward and ask or explain why my ticket was cancelled.”

Earlier R K Singh, who is BJP MP from Ara has also taken a dig at the Bihar unit of party for not giving election tickets to the worthy candidates.

R K Singh, a former home secretary said, “Popular sitting MLAs are denied tickets and criminals are being given the tickets. No wonder party workers are enraged in Bihar. What is the difference between you (BJP) and Lalu Prasad if you give tickets to criminals? I will not campaign for such candidates even if the party asks me to.”

R K Singh’s accusations compelled the Home Minister Rajnath Singh to speak up and he termed the accusations as baseless, he said, “In BJP, ticket distribution is done fairly considering all aspects.”