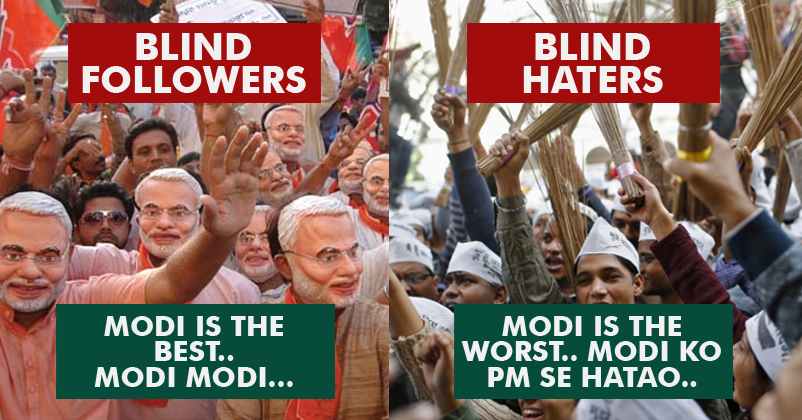 Admit it that having an opinion on anything is our right. No one can dare to take it away from us. Freedom of expression is something that has given us the right to share our views on every subject that we think is worth of our time. But the most basic step to have an opinion on something is to first assess the subject, do your research and then come on to a conclusion which is apparently many blind followers and blind haters are nowadays failing to do so. A few weeks ago, when Arvind Kejriwal made the allegation of EVM Tampering in UP elections, we RVCJ team did our own research on that matter and came up with this article where we showed that EVM machines couldn’t be hacked. A lot of people on our Facebook page started supporting us and called us the real ‘Nationalist’ (as if it was a criteria). Soon after that, we again came up with an article where we showed how EVM machines can be tempered. Now you might say that by publishing this article we showed our double standards. But that is completely wrong. Within splits of seconds, people on our Facebook page started abusing us for being ‘ANTI-NATIONALIST’ and not supporting the Modi government. Now sharing a news about the possibility of EVM tampering doesn’t mean that the election results in UP were fabricated. The article was published with an intent to share knowledge and not making any allegations.

But the way some people reacted to that article made us realize that for some people, speaking up against the BJP government or even slightly addressing the opposition party’s claim is always an act of being ‘ANTI-NATIONALIST’. Now having such a bizarre assumption in a country of 1.2 billion people who are apparently having 2.4 billion opinions is just way too stupid.

In that article, we just shared the news which showed us the possibility of EVM tampering. The information provided in that article (video) were way more specific than the ones we showed in our earlier article. Perhaps, that was the only reason why we decided to share that information with you people so that we could present both the sides of the story. We are a media news channel where it is our duty to show you the picture from both the sides where we appreciate and criticize the decisions irrespective of the party, religion or caste. But in the midst of doing that, there are always a lot of people from both the sides who abuse us whenever we show something that is not favoring their opinion. They always forget the fact that, there were times when we also appreciated the news which was favoring their opinion too. However, it’s not about favoring opinions, but it’s more about the GOOD and the BAD. When BJP government do something good, we appreciate that and when they don’t do something good, we criticize their decision. The same can be said and should be said for any other person, party or organization. You just simply can’t afford to blindly follow any organization or person. When we blindly follow a party or a person, we start neglecting our conscious to question them and in return of that, they get the confidence to do anything they want in the name of our trust.

Our problem is with the Blind Followers and Blind Haters. They are just ruining the nation and spreading a sense of hatred. Blind Followers are the people who always support the government (BJP, Congress, AAP and etc) without introspecting their actions and plans. Blind Haters are the people who always hate the government even for the work which is actually good in the interest of the nation. It is always advisable to make your opinion CASE BY CASE as you just simply can’t put a general equation for all the problems and expect your answers to correct, especially when the questions are quite complicated. Always try to answer and make your opinion based on logic and not with the kind of affinity that you have for that party or person.

When Narendra Modi signs any kind of deal with the other nations for the sake of development in India, blind haters always turns up and criticize him for touring such countries and clicking selfies on the money of taxpayers. Whereas the fact of the matter is that during such visits, the government signs a number of deals with various companies and the government of the host country itself who eventually make direct investments in our country. However, when we look into the manifestos of BJP government for the elections in UP and the North East region, we can clearly see how they omitted the beef ban issue from the North East election manifesto. But according to the blind followers, there is a reason why it is all okay to eat beef in the North East region as according to them it’s the Jersey cows that are mainly available over there and not the ‘desi’ cow who they actually consider as their mother. These jersey cows are equivalent to outsiders and can be eaten anyway.

Both the sides show an insane amount of hypocrisy. The blind followers consider it as their birthright to tag others as anti-nationalists who don’t agree with their opinion. But apparently, they kept their mouth shut when BJP party members were arrested for being ISI agents. At the same time when petrol and diesel prices were increased, the blind haters shouted the loudest. Even we criticized our government for failing to control the prices. But when prices came down, there were no signs of any such blind haters. But it was the logical thinkers who came out and appreciated such news.

Please share your opinion and views in the comment section below even if they are against us because it’s your right to express.

Kejriwal Chanted “Modi-Modi” While Addressing A Rally In Delhi! Video Will Leave You In Splits!
PM Modi And Sheikh Hasina Laughed Really Hard For Almost A Minute For This Hilarious Reason