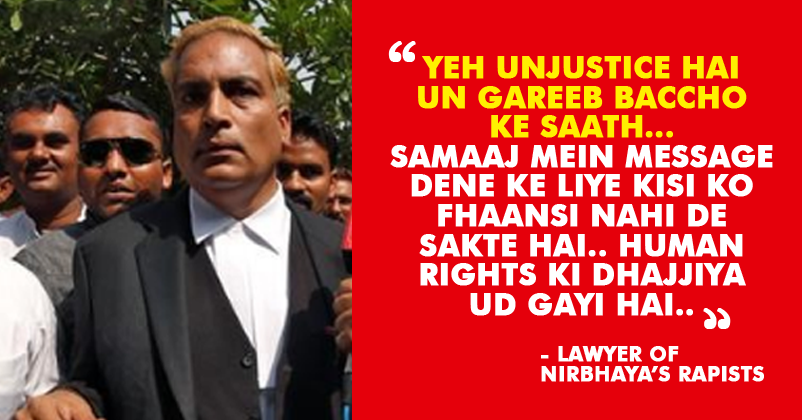 Today, everyone is enjoying the decision given by Supreme Court on the Nirbhaya rape case; the apex court said that convicts should be hanged till death. On 16th of December 2012, people had held candle light marches to condemn this act and all they wanted was justice; now that the apex court has given such a perfect decision, people can’t stop thanking it.

However, the lawyer of those 4 convicts, A P Singh is very unhappy with the verdict; he is completely against it and has said that this decision i.e. death sentence has slaughtered human rights. He adds that soon the review petition will be filed as the court has done injustice.

Your blood will boil after watching this video…

In his words, “Human rights ki dhajjian ud gayi hain”; Singh says the court can’t grant a death sentence just to show something to the nation or for the purpose of teaching something.

Here’s one more video in which he is saying that court’s decision is unjust;

This is not the first time that AP Singh is talking so pathetically; earlier too, he was quoted as saying,

“If my daughter or sister engaged in pre-marital activities and disgraced herself I would not spare her rather i would certainly take this sort of sister or daughter to my farmhouse, and in front of my entire family, I would put petrol on her and set her alight.” When AP Singh said, “Gareeb Bachon ke saath injustice hai”, didn’t you feel that frustration? What do you have to say about this? Let us know your views in our comments section below.