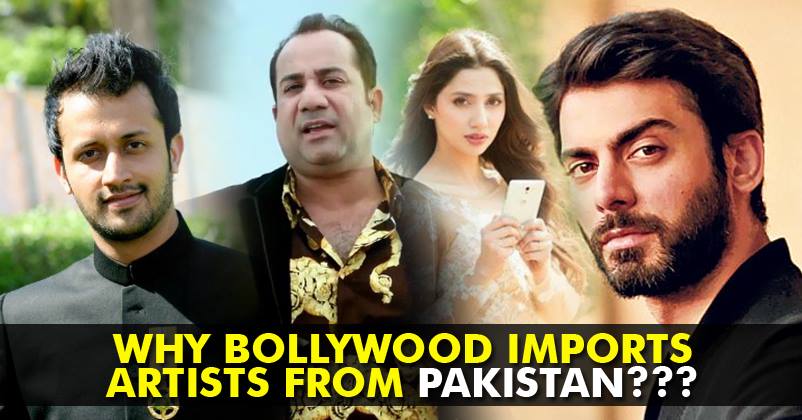 Time and again we have been debating on this topic. Should they leave our place or should we throw them out ? Well, You can’t call it a burning question if you don’t provide appropriate options for it. We Indians and more precisely Raj Thackeray and his followers should feel good and generous about Pakistan that it’s not just the terrorist which they export in India. (Humour Intended)

Some include good people too who have nothing to do with terrorism except hating it. Actors, singers, models, scriptwriters and what not. As an avid entertainment consumer, Pakistani artists serves as a great source of entertainment for me. And this is not just my own review, many people believe it. Social media is a platform where with a click of a button you can indeed scroll across the mindset of millions of people.

ART (be it dance, music, acting, writing or whatever) doesn’t need a language or culture or religion to present itself and make people understand its real meaning. Many people say that Pakistani Artists steal our countrymen’s job in Bollywood industry which creates problems like unemployment that leads to bankruptcy. Well, to a certain point it is RAW and TRUE ! ! But this is not what we should call as ‘stealing’. And if this is what we call as stealing, then I wonder what our fellow Indian exported Doctors & Engineers are doing in America. Probably earning AMERICAN DOLLARS ! ! Isn’t this HYPOCRITICAL from our side to call these Doctors and Engineers as ‘Making Our Country Proud in Foreign Soil’ and accusing Pakistani Artists working in India as a mere Job Thieves ?

Well the fact is that ‘WHEN PEOPLE OUTSIDE FROM YOUR MAINLAND TAKE AWAY YOUR JOB WHO ARE NOT FAMILIAR WITH THE SITUATION AND CULTURE, THEN IT IS YOU WHO SHOULD BE BLAMED FOR YOUR LOSS’. Pakistani Artists are successful in India not because of the GODFATHER like support given to them by Karan Johar but because of the large scale acceptance by Indian Audience. And if a support from Karan Johar is really a big deal, then I don’t think so that we would have come up Alia Bhat jokes.

SOME PEOPLE should understand that Entertainment Industry runs on the fuel of talent and skills and not on the QUOTA of caste, creed, religion, community and nationality unlike in the case of POLITICS.

Fawad Khan was already a famous star back in his home Pakistan and since our world, INTERNET, is a indeed a small world, many Indians already knew his acting skills which helped Fawad Khan to get absorbed in Bollywood Industry. I don’t know about the rest of the India, but anyone who stays in Delhi, Rahat Fateh Ali Khan’s voice in Radio late at night was the only voice which had the potential to make you lost in the world of alluring dreams. Many Indian teenagers indeed grew upon listening to his songs in late 90s. He was accepted in India way before the debate of acceptance even began.

And if Rahet Fateh Ali Khan seems new to you along with the likes of Atif Aslam and Zafar Ali, allow me to request you to ask the names like Nusrat Fateh Ali Khan, Mehdi Hassan Khan, Gulam Ali and Mehdi Hassan to your grandparents. These legends were and are still the superstar in the world of Music in India.

On the other hand, Mahira became quite popular with the show ‘Humsafar’, a love story, which was followed by a heartbreak. This concept was highly appreciated by Indian audience, as the show was quite hard-hitting and realistic. With Humsafar, Indians fell in love with ‘Humsafar’ as they got something exotic to see.

The reason why ‘SUFI’ music is largely accepted in India is because we Indians are indeed a big consumer of such a genre of music. In India, apart from Folk Music, SUFI is also one among the most accepted form of music. In a country where majority of people belong to Hinduism, the exposure of the beauty of SUFI music to its preachers is indeed very limited. Hence, the inclusion of Pakistani singers in our Music Industry indeed helps us to experience a new vivid genre of music. It’s time for SOME PEOPLE to understand that India is large enough to accept talents from various sections of people not on the basis of religion and nationalities but on the basis of acceptance. They should understand that India has got a variety of audiences devoted to different types of music, movies and genre. It’s time for US to move on from this issue and start focussing on something better.

If He Comes As A Guest On ‘Comedy Nights Bachao Taaza’ All TRP Records Would Be Broken!
Aishwarya & Ranbir’s 18 Yrs Old Pic Goes Viral & He’s Looking Like A Cute Chubby Boy