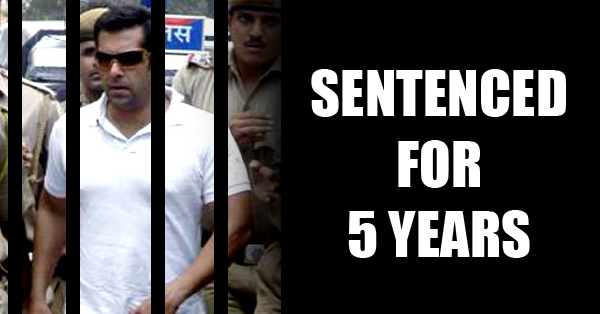 This is it. A Long wait for the Hit & Run Judgement is now over. After 13 Years Mumbai Sessions Court today announced its judgement on the 2002 Hit & Run case.
Salman Khan was found Guilty and was Sentenced for 5 Years for killing One man and Injuring 4 Others in Sept 2002.
Though recently the case took a sudden twist when Salman Khan’s Driver came forward and announced that it was he who was behind the wheels and not Salman but the Court refused to accept his statement and convicted Salman Khan. The Court today at around 1:30pm announced its Judgement to sentence the Actor to 5 years jail term.
With the Judgement came numerous reactions of Salman Fans. The news shook even the BTown and several Celebs who stood by Salman Khan had reacted to the judgement. Here are the reactions of the Celebs to the Judgement which went against the much loved Actor of BTown.

I stand for the man who stands for everyone .. Always respect you big brother @BeingSalmanKhan your fans R with you🙏 pic.twitter.com/MAjjjRx9Gp

@BeingSalmanKhan is the nicest human being in this business. Wish all our Prayers and love help him in this difficult time. Deeply saddened.

Cant wrap my head around what's happening,scary how fickle life is,hope n pray he emerges stronger like he has in the past @BeingSalmanKhan

He is the man that saved my Mothers life. That I will never forget. #SalmanKhan

Strong message of rule of law thru Salman's case. Judgements come one day, howsoever one may keep the wolf away. It returns..Law of nature..

Hmm. Kodnani killed 97, Bajrangi killed 95 in '02. Those weren't accidents. They were convicted. Yet, they are out on bail. Justice, my ass.

My prayers are with @BeingSalmanKhan and his family who I know love this country and respect its judiciary.

@BeingSalmanKhan is a man who has always helped d underprivileged!A man who has done so much humanitarian work.Prayers for a fair judgement.

Hurts to think of what could happen. We will always be with you. Hope the judge sees the beauty of a human being that Salman Khan is.

It hurts when your own are punished, even if they are in the wrong. We love you and are standing by you

Terrible news. Dnt knw wht to say except tht will stand by @BeingSalmanKhan no matter what. Hes a good man and no 1 can tk tht away frm him.

Some Bollywood Stars Should Better Close Their Mouth And Appear Dumb, Rather Than Open It And Prove It. #SalmanVerdict #Abhijeet #Farah

I won't comment on the courts judgement. But salman Bhai has the biggest heart and is the most helpful person in this industry

And then we have someone who may be was Drunk while tweeting or was out of his Mind. Abhijeet remember that partially bald guy who was once a Judge in INDIAN IDOL? How irresponsibly can he tweets something like this and call all the needy people sleeping on roads as DOGS -_-

Somebody please remind him that they were on Footpath and not on the Road. And If sleeping on Footpath is Wrong, Abhijeet would you mind answering who and where is it accepted to drive your car on a footpath?

What do you guys think about the Judgement? Salman Khan is a Generous Man but coming to Law it should be equal for all. And people like Abhijeet and Vishal Dadlaani should once think of the innocent woman who is struggling to run her family all alone since 2002.