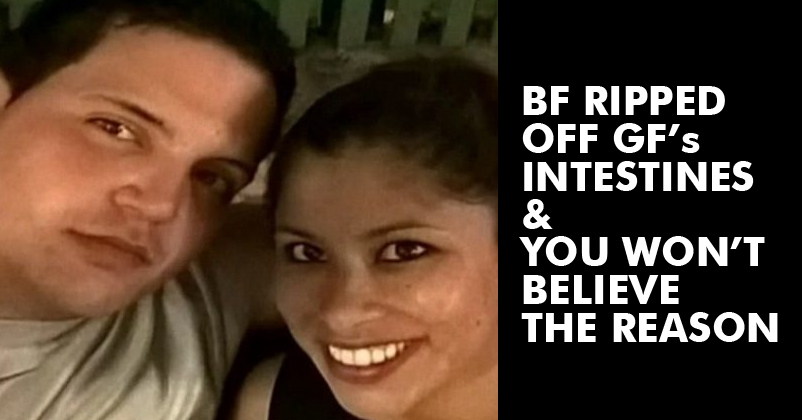 We all have teased our friends about our potential affairs with their crush, but hardly ever felt the need to explain this mere joke to them. A relationship is built upon trust, and this is something which can’t be repaired once someone breaks it. A 24 years old Fidel Lopez from Florida killed his 31 years old girlfriend Maria Nemeth by hitting her head hard with a sharp object and then later on ripping her intestines out of her body with his bare hands. According to the reports, he used many sharp and blunt objects ( Beer Bottle Glass ) to cut it through her private parts and yanking out her organs.

The reason for such an insane and cruel murder is because of the outrage that broke out when his girlfriend took her ex husband’s name TWICE during the act of love making. Well, this certainly comes as a joke in many of our whatsapp group jokes, but such a reaction was hardly anticipated. After murdering her, he immediately called up the police and scripted the whole scenario where he fabricated the story and tried to get away. He initially told the investigators that he and his girlfriend had been having rough ‘LOVE MAKING’ and when she asked him to go more wild and then ‘shit happened’ which resulted in her death. Earlier when police came into the house, he had been shedding tears.

Although after further strict and firm investigation, he confessed that he became a monster after he got ‘REALLY REALLY MAD’ when his girlfriend took her ex husband’s name.

According to one of the investigators, the couple had been drinking tequila in their apartment at that night and decided to make love in the most fancy and rough manner. They decided to do it in a closet where she yelled her ex husband’s name twice which made her boyfriend burn in anger. He left his girlfriend in the closet and began smashing things around the apartment, including a sliding glass door, and punching holes in the walls. After returning to the closet, he started inserting many sharp objects inside his unconscious girlfriend which led to her death.

There was a large amount of blood on floor in the closet along with many patches of blood on walls and doors which concluded that there was indeed a scuffle between of them and ‘foul play’. ‘There were also what appeared to be several chunks of bloody tissue on the floor inside the closet, Officer Christopher Piper noted in his report.

His girlfriend died within 30 minutes after he made the call to police for an apparent help. According to the neighbours, the couple had moved into the apartment just a week before this incident. Nemeth a native of Peru, was working as a leasing agent at the Colonnade Residences on NW 128th Terrace for the past five years. She was earlier married to Norbert Nemeth in April 2007, but their marriage didn’t work out and later, they got separated. Hike Messenger Vs WhatsApp, It’s On! And Why You Should Use The Desi Hike!
You Will Not Believe Your Eyes After Knowing The Brain Behind “Acche Din” Slogan