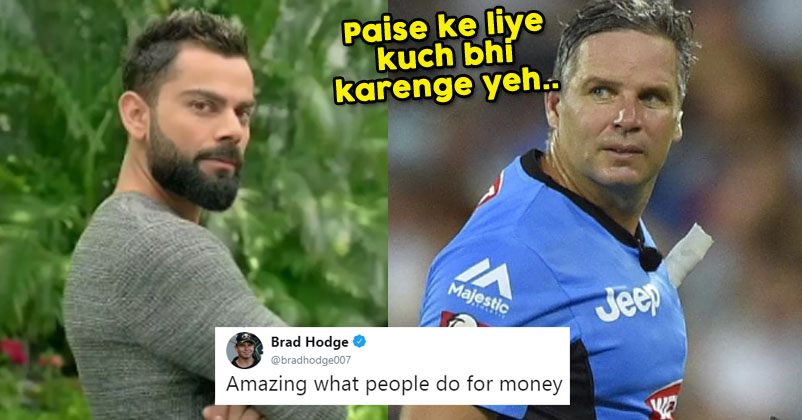 Indian Cricket team captain Virat Kohli and the budding wicket keeper-batsman Rishab Pant was signed by a renowned company of a men face care products as the brand ambassador to promote their new line products.


The company released the new campaign and words will fall short to describe how cringe the video is apart from Virat carrying his charm. However, Virat and Rishab Pant were highly criticised for the new ad campaign.

The advertisement released on Thursday shows Virat Kohli and Rishab Pant showing of their coolness by dancing and rapping about the benefits of the product to cure pimples. Well, everyone is rapper these days!

Kohli took to his twitter to share the campaign with his fans soon it was seen by millions and became the highly criticised ad campaign of Captain Kohli.

Former Australian Cricketer Brad Hodge took a dig on Virat, he remarked a tweet in response to the advertisement done by Virat and Rishab saying “Amazing what people do for money’.

Amazing what people do for money

Well, the tweet by the 44-year-old former cricketer did not go well with the Indian fans and Brad Hodge was roasted by the fans to another level. The fans even targeted Australia as a whole and mocked him by saying “Amazing what people do win a match”.

Brad Hodge later posted another tweet trying to save himself from the irked fans brutally tolling him by saying he would do the same. But the fans were in no mood to spare him!

Amazing how brutal people are in response. So negative and glass half full. I was not speaking in a negative tone. I would do the same if asked and paid.

Have a glance at some of the brutal tweets targeted to the former Australian cricketer:

Lost count of the number of times I have watched this video.
pic.twitter.com/3QFHnPlOcO

Amazing what people do to win games #sandpaper

But also amazing for someone to be that adored that THAT is still considered cool.

Bhai Angoor Khatte Hai. I understand CA doesn't allow this. 😛
But understand Aus companies won't have that much money to shell out. #BhakBC

If you were even 1% of virat, you'd get that much money… Sad though

How is it bothering you ? Is it because you dont hav any work & sitting idle ? Or is it because you didnt earn anything in this season of ipl . Dont know why australians are too much bothered about Indian Cricketers even when they cant control their own mates (ball tempering 😓).

Lol….his earning last yr itself was 23m..only cricketer in Forbes,total nearly 60million+.. tis could be just peanuts fr him

What Brad Hodge tweeted, doesn't look good, but the ad is really shit, horrible and cringe.

P.S – The advertisement is a nightmare!

Rohit Sharma Takes A Dig At Ajinkya Rahane After He Posted This Picture On Twitter
Revealed, MS Dhoni’s amazing Punishment Idea to stop his Teammates from Being Late for meetings & practice