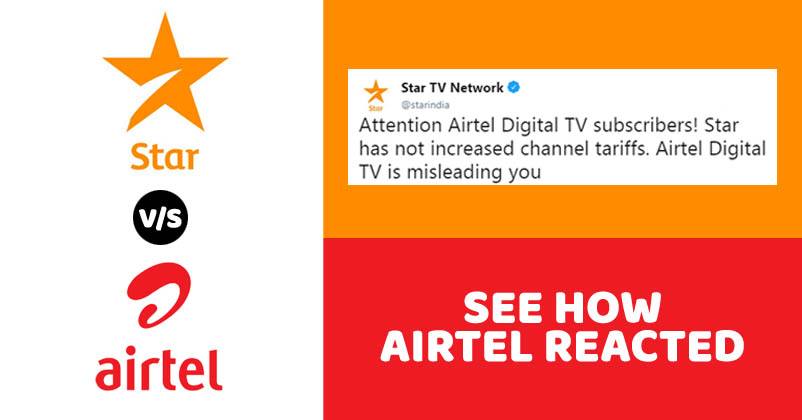 Brand wars are common on social media. Couple of days back, we came across one more between Airtel Digital TV and Star India.

What happened was that on Friday, Star India lashed out at Airtel Digital TV & accused it of taking higher charges from the customers. As of now, customers are seeing a banner on various Star Channels which state that they might go off-air if the contract isn’t renewed.

Star India took to the micro-blogging platform to state that they haven’t raised the tariff. On the other hand, Airtel Digital TV was accused of bringing in “Unilateral” increase in the prices. Star India openly said that Airtel Digital TV is misleading customers as it is charging higher prices of Star Channels.

The company urged customers to not use Airtel TV but to switch to various other DTH cable providers. Here’s that tweet;

Star India also said that Airtel Digital TV is charging as much as 1000 channels that are provided by Star.

Soon, Star India hit back with a tweet. They said that what Star India said is totally a lie. Here’s that tweet;

“We are shocked at the malicious, misleading and defamatory campaign based on blatant lies being run by Star TV. There is no truth, whatsoever, in Star TV’s assertion that Airtel Digital TV is unilaterally increasing prices of Star TV channels across its packs. We urge customers and public at large not to fall for these lies.

It is public knowledge that Star TV recently made a massive bid to acquire exclusive rights to a popular sporting event and is now left with no option but to arm-twist and extract the sunk cost from DTH/Cable operators and advertiser.

The fact is that Star TV has been demanding an unreasonable hike in rates from Airtel Digital TV. Passing on such a steep hike in charges to our customers in the form of higher pack rates is not an option for us. Since Star TV has taken such an unreasonable stand, Airtel has been forced to take Star channels on RIO basis at a high cost.

# All key Standard Definition (SD) channels from STAR network will continue to be available to Airtel Digital TV customers as part of their existing packs (no price increase). Airtel will bear the higher cost of these channels. Customers can go channel number 102 on Airtel Digital TV or www.airtel.in/dthinfo to get complete details of how to activate these channels.

# We have also ensured that our customers have continued access to LIVE sporting events, including the upcoming IPL 2018. Star Sports 1 and Star Sports 1 Hindi would be available to all eligible consumers.

So this is how Airtel gave it back to Star India. What do you have to say?